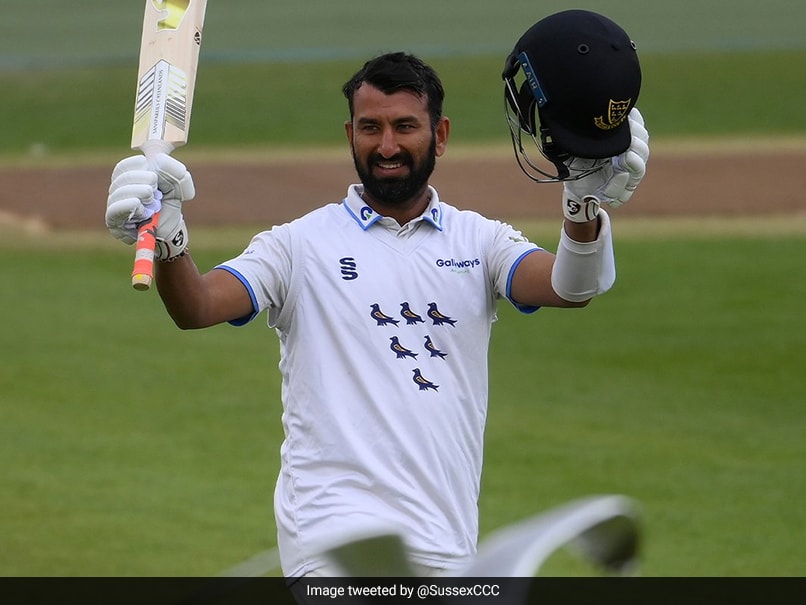 He left for the UK in search of some runs and open the door for an India comeback. But Cheteshwar Pujara has already done more than that, scoring his second double century for Sussex in the County Championship Division Two on Saturday. Pujara made 203 and faced 334 balls, in which he hit 24 fours. The senior India player was batting overnight on 107, which helped his side take a substantial lead against Durham, who were all out for 223 in their first innings.

Thanks to Pujara's effort, Sussex extended their dominance on the third day of the match, their innings ending at 538 for a massive lead of 315 runs.

With Sussex enforcing follow-on, Durham were 38 for no loss in their second essay, still trailing by 277 runs.

The out-of-favour India batter, who is in sparkling form, is making most of his county stint. He now has scored two hundreds and as many double centuries in his five innings.

Making his debut for Sussex, Pujara had scored 6 and an unbeaten 201 to help his side draw the match against Derbyshire.

In Sussex's 34-run loss to Worcestershire, he scored 109 in the first innings, followed by 12 in the second essay.

The big runs will keep Pujara in contention for a place in the Indian squad when they travel to England for the postponed fifth Test later this year.

The veteran batter was dropped from the Indian Test team following the series loss in South Africa earlier this year.

Cheteshwar Pujara Mohammad Rizwan Cricket
Get the latest updates on India vs South Africa and check out  Schedule, Results and Live Score. Like us on Facebook or follow us on Twitter for more sports updates. You can also download the NDTV Cricket app for Android or iOS.