Pujara also scored a blistering 203 off 221 deliveries against Madhya Pradesh in the team's previous Ranji encounter. 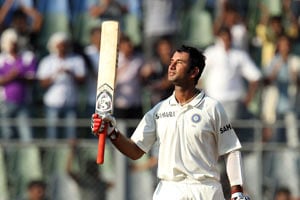 Cheteshwar Pujara celebrated his inclusion in the Indian ODI squad with a triple-century for Saurashtra in their ongoing Ranji Trophy quarter-final against Karnataka in Rajkot. Pujara finally finished his marathon knock on 352 off 527 balls, which is also the highest ever Ranji individual score, but not before ensuring his team's safe passage into Ranji semis. India play England in the first one-dayer which is also in the same town.

Pujara resumed his innings on 261 at the Saurashtra University Ground and reached his 300 off 356 deliveries on the final day of the Ranji Trophy quarter-final. Saurashtra crossed 700 in their second innings riding high on his massive innings.

"My plan was to get some practice for the ODI. Once I was set, once I scored my hundred I was in a positive mood and our team was safe," Pujara had told ESPNcricinfo. "Even if I would have got out, we were still safe to qualify."

Pujara also scored a blistering 203 off 221 deliveries against Madhya Pradesh in the team's previous Ranji encounter.

With India having a more or less settled middle-order in Virat Kohli, Yuvraj Singh, Suresh Raina and skipper MS Dhoni, it remains to be seen whether Pujara will get a look in for the first ODI. The major thing in his favour though, would be the 'home ground' factor.

Virender Sehwag was the one dropped to accommodate Pujara and it won't be a big surprise if the Saurashtra lad is asked to open the innings along with the under-fire Gautam Gambhir. That will mean Ajinkya Rahane has to be benched again.

Comments
Topics mentioned in this article
Cricket India Cricket Team Irfan Pathan Vikram Solanki Wasim Jaffer Paul Valthaty Cheteshwar Pujara Virat Kohli SAU
Get the latest updates on ICC T20 Worldcup 2022 and CWG 2022 check out the Schedule, Live Score and Medals Tally. Like us on Facebook or follow us on Twitter for more sports updates. You can also download the NDTV Cricket app for Android or iOS.