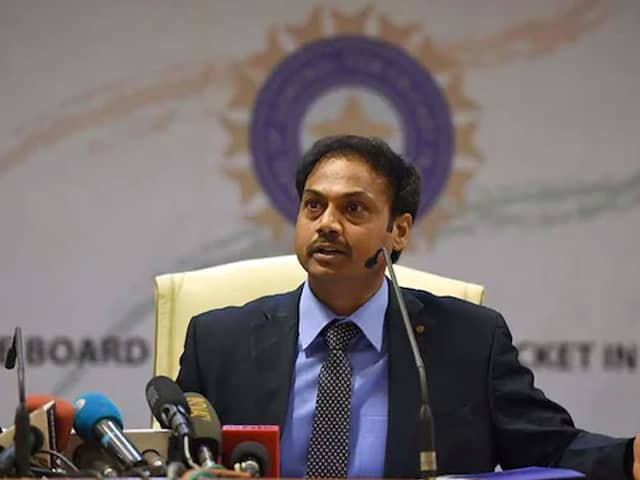 Chief selector MSK Prasad and his colleague Gagan Khoda will leave after serving their tenure.© AFP

The BCCI on Saturday invited applications for the post of national selectors with only two slots to be filled in the senior panel vacated by incumbent chairman MSK Prasad and his colleague Gagan Khoda. The advertisement also makes it clear that selection committee tenure will be four years and Sarandeep Singh (North), Devang Gandhi (East) and Jatin Paranjpe (West) will continue for one more year. However it is clear, whoever the new selector is will be the chairman as neither of the three existing have the stature to lead a senior selection panel.

The senior selection committee will be in charge of picking the India, India A, Duleep, Deodhar, Challenger series and Rest of India for Irani Cup squads respectively.

Along with the senior selection committee, the entire women's selection panel will be overhauled while the junior men's committee will feature two changes.

The last date for submission is January 24. It is still not clear whether the proposed Cricket Advisory Committee comprising Madan Lal, Gautam Gambhir and Sulakshana Naik will be conducting interviews of the interested candidates.

The criteria to become a national selector rules out anyone who is above 60 years of age. Former India batsman Dilip Vengsarkar, whose name was floated by a section of the media, is 64 years old.

The BCCI brass led by Sourav Ganguly has adhered to specifications given in the new constitution where qualification for applying for senior selector's post requires a candidate to play either seven Tests and 30 first-class games or 10 ODIs and 20 first-class matches.

The person needs to be retired from all forms of cricket for at least five years. The KRAs (Key Responsibility Area) include: firstly, selecting the best possible team in fair and transparent manner.

Secondly, planning and preparing a strong bench strength for the national team. Third is attending team meetings as and when required. Last but not least is travel to watch international and domestic matches.

For the junior selection committee, the requirement is 25 first-class games and one of the two selectors who would be relinquishing his post is Rakesh Parikh.

For the senior women's team, even one international game for India is a good enough qualification.

India U19 Mannava Sri Kanth Prasad BCCI Cricket
Get the latest updates on IPL 2020, check out the IPL Schedule for 2020 and Indian Premier League (IPL) Cricket live score . Like us on Facebook or follow us on Twitter for more sports updates. You can also download the NDTV Cricket app for Android or iOS.