Adelaide Strikers vs Melbourne Renegades: Stationed at the midwicket boundary, Tom Cooper completed a remarkable catch but made it look so easy. 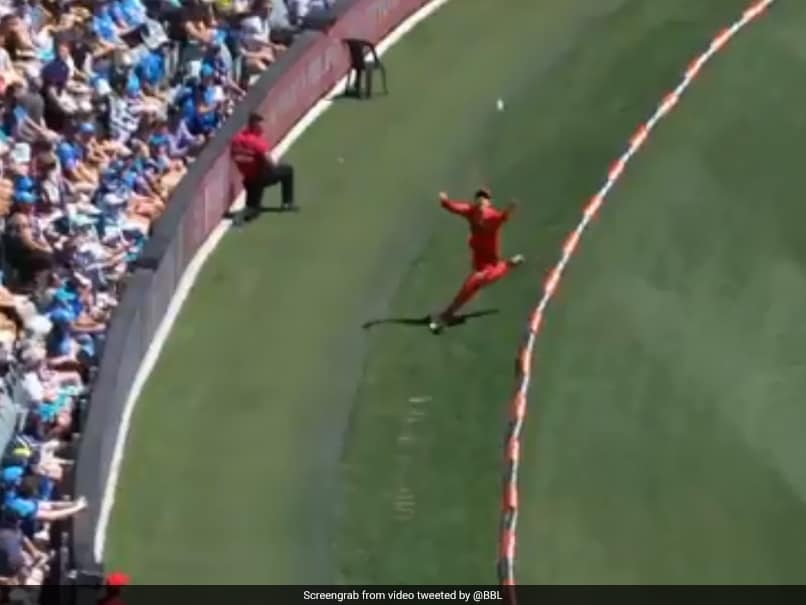 Fielders seem to be breaking all boundaries when it comes to innovation and moments of inspiration in the field. So much so that some incredible fielding efforts have almost become an everyday affair. Case in point, Tom Cooper's stunning catch in the Big Bash League clash between Adelaide Strikers vs Melbourne Renegades on Sunday. Stationed at the midwicket boundary, Tom Cooper grasped the catch but with his momentum taking him over the boundary line, he tossed the ball in the air, keeping his eyes firmly on the prize, the Australian cricketer got back into the field of play and completed the catch.

Tom Cooper made the difficult catch look so easy that even BBL's official Twitter handle captioned the video: "Remember the time when we thought these catches were the most incredible things ever?"

Remember the time when we thought these catches were the most incredible things ever?

Those were the days #BBL09 pic.twitter.com/UYtNn2PI84

Cooper's brilliant fielding effort was crucial to Melbourne's cause as it broke the first-wicket partnership between Jake Weatherald and Philip Salt, which was threatening to take the game away.

Jack Wildermuth was the beneficiary of Cooper's remarkable catch. Weatherland didn't stick around for too long either and was dismissed in the next over by Mohammad Nabi.

At 81 for four in 10.4 overs, Melbourne would have been hoping to the land the knockout blow on the Strikers but it wasn't to be as Jonathan Wells and Matthew Short brought took their team to a solid score.

Wells struck a 38-ball 58, which included five fours and a six, while Short smashed 41 off just 28 balls to power the Adelaide Strikers to 173 for six.

In reply, the Renegades made a nightmare start, losing Marcus Harris and Sam Harper in the first-two overs. Peter Siddle then removed Shaun Marsh to leave the Melbourne Renegades tottering at 60 for three in 9.2 overs.

Mohammad Nabi was dismissed for 6 by his countryman Rashid Khan as Melbourne fell further behind.

Beau Webster, though, kept his team's hopes alive by taking on the Adelaide bowlers. At the time of writing this, Webster was unbeaten on 47 off 30 balls with Melbourne Renegades 92 for four in 13.3 overs, still needing need 82 more runs off 39 balls.

Australia Cricket Team Tom Cooper Jake Weatherald Philip Salt Cricket
Get the latest updates on ICC Women's Cricket World Cup 2022 and IPL 2022, check out the Schedule , Live Score and IPL Points Table. Like us on Facebook or follow us on Twitter for more sports updates. You can also download the NDTV Cricket app for Android or iOS.