A young fan had to be taken to hospital after getting hit in the head by a six during the BBL 2019 match at Manuka Oval on Saturday. 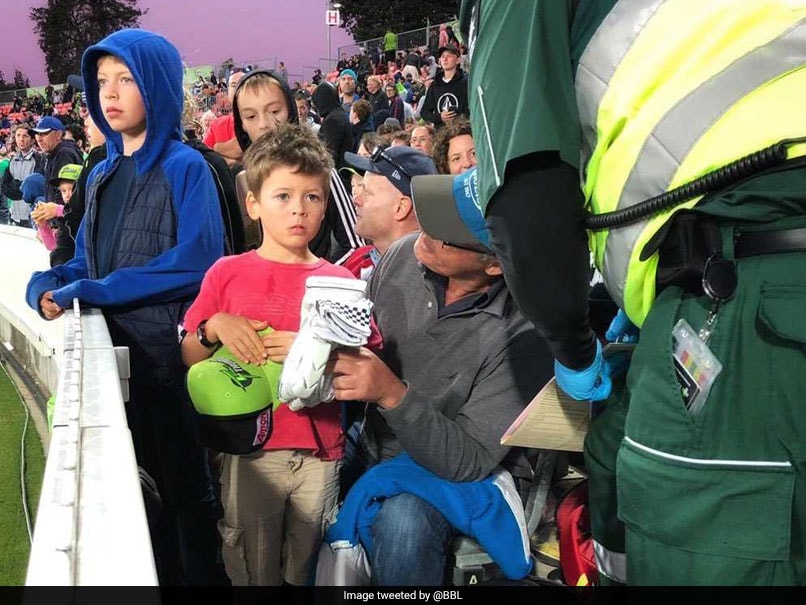 The young fan received surprise gifts from George Bailey and Daniel Sams after being hit by a six.© Twitter

George Bailey and Daniel Sams might have been in opposing teams in the Big Bash League 2019 (BBL) but that didn't stop the Australian duo from being involved in a heartwarming moment with a young fan that immediately won over the social media. A young boy in the crowd was hit during Hobart Hurricanes' innings when George Bailey smashed a maximum. There was a brief stoppage in play as the boy, who was in tears, was attended by players and medical staff. The youngster was taken to hospital as a precautionary measure but fortunately escaped any serious injury.

After the end of the Hurricanes' innings Bailey gave the young fan his batting gloves.

The fan had another surprise as Sydney Thunder bowler Daniel Sams was captured on camera giving the boy a signed cap.

How good is this from Daniel Sams?

The @ThunderBBL all-rounder gives his playing cap to the little kid who got hit by a George Bailey six. All class #BBL08 pic.twitter.com/nvbons6WSj

And he gets George Bailey's batting gloves as well. Hope you're feeling okay little man!#BBL08 pic.twitter.com/zBCKlgBFia

The young fan was later clicked wearing Bailey's gloves and Sams' cap, and sporting a big grin on his face.

He's at hospital for a check - but looks pretty pleased to have George's gloves and Daniel Sams hat. Thanks to players and St. John's for the care. pic.twitter.com/lX9Tnzwk43

However, it was not enough for Bailey and his team.

Ahmad took two wickets for 22 in four overs while Short gave away 27 off his 4 four overs with two scalps but crucial contributions from Usman Khawaja (36 off 21 balls), Callum Ferguson (47 off 34 balls) and Chris Green (34 not out off 28 balls) helped Sydney Thunder reached the target with four balls to spare.