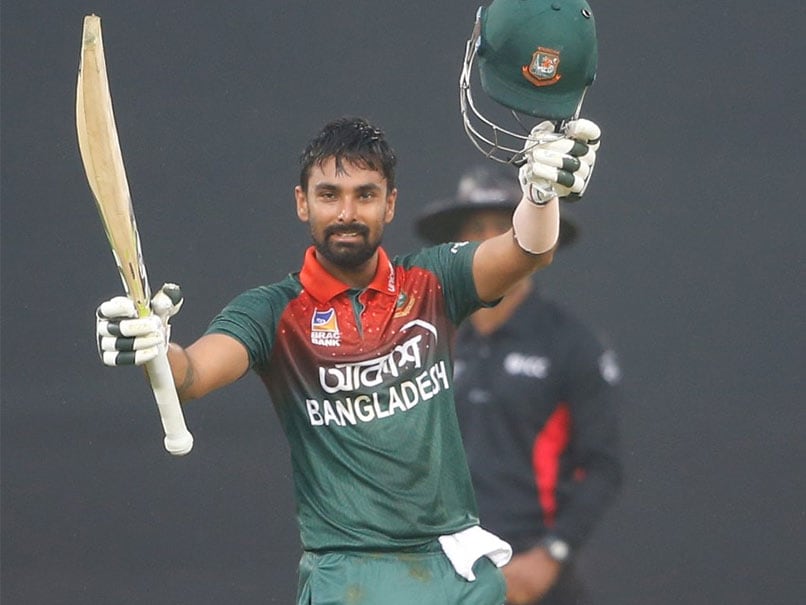 Liton Das and Tamim Iqbal became the first Bangladeshi opening pair to score a hundred each as Bangladesh crushed Zimbabwe by 123 runs in the rain-hit third one-day international to complete a clean sweep in the three-match series in Sylhet on Friday. Liton hit 176 off 143 balls, the highest ever individual ODI score for Bangladesh, while Tamim stayed unbeaten on 128 off 109 balls as the duo put on 292 runs in Bangladesh's highest partnership for any wicket.

Liton and Tamim guided Bangladesh to 322-3 in 43 overs before 4-41 from Mohammad Saifuddin ensured victory and gave captain Mashrafe Mortaza a fitting farewell.

It was Mashrafe's last game as Bangladesh's ODI captain after he announced his decision to step down from the position on Thursday and his teammates rose to the occasion to dominate Zimbabwe.

As Bangladesh's innings was interrupted by rain, Zimbabwe were set a revised target of 342 in 43 overs under the DLS method, but were bowled out for 218 in 37.2 overs, with Sikandar Raza making 61.

Mashrafe, who oversaw 50 wins as skipper, began the demolition in the very first over before finishing with 1-47, while Taijul Islam (2-38), Mustafizur Rahman (1-32) were also among the wickets.

"This is a great honour. My boys have been fantastic. They have given everything for the team. I'd like to say my thanks to all the boys," said Mashrafe, who was presented with a special memento by the Bangladesh Cricket Board after the match.

Striking 16 fours and eight sixes in his third ODI century and the second in the series, Liton broke the record of his opening partner Tamim, who scored 158 on Tuesday.

The match was reduced to 43-overs-a-side when rain halted play after 32.2 overs of Bangladesh's innings, and the opening duo, who had put on 182 at the time of the interruption, added another 110 runs before finally being separated.

Liton was reprieved on a no-ball on 107 and was also dropped on 122 and 144 respectively by Raza and Wesley Madhevere.

Carl Mumba finally dismissed Liton as Raza took a catch at long-on to end the record-breaking partnership, which surpassed Shakib Al Hasan and Mahmudullah Riyad's 224-run stand during the 2017 Champions Trophy against New Zealand in Cardiff.

Mumba later took the wicket of Mahmudullah (three) and debutant Afif Hossain (seven) to finish with 3-69 as Tamim clubbed seven fours and six sixes in his 13th ODI century.

"It has been a very disappointing series for us. Looking for the T20s now to put this in the past," said Zimbabwe captain Sean Williams.

The two teams will next play a two-match Twenty20 international series at Dhaka's Sher-e-Bangla National Stadium on March 9 and 11.

Liton Das Cricket
Get the latest updates on IPL 2021, check out the IPL 2021 Schedule and Indian Premier League Live Score . Like us on Facebook or follow us on Twitter for more sports updates. You can also download the NDTV Cricket app for Android or iOS.