Bangladesh scored 322/8 thanks to Tamim Iqbal's 158 - the highest individual score by a Bangladesh player in ODIs - and held their nerve to win by four runs. 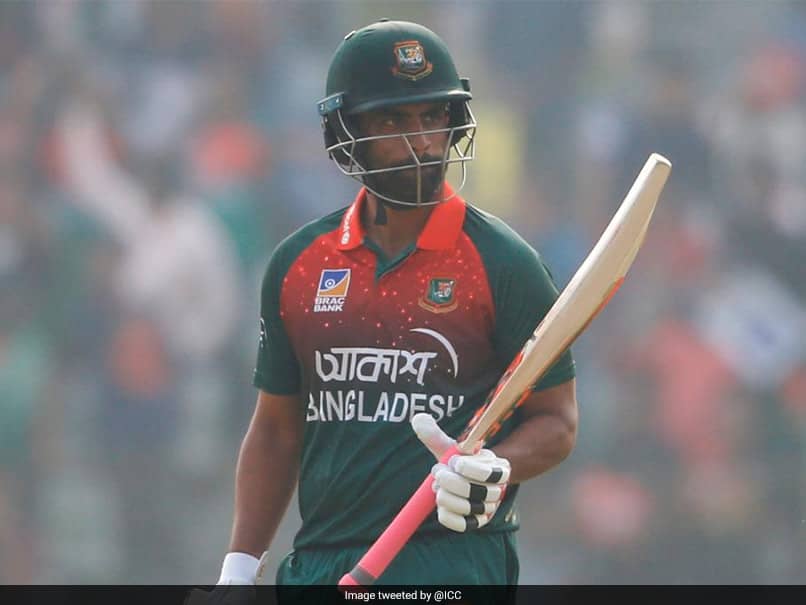 Tamim Iqbal scored 158 for Bangladesh as they secured a thrilling four-run win over Zimbabwe.© Twitter

Zimbabwe almost pulled off a stunning win but Bangladesh edged past their spirited rivals in the end to save the day, registering a thrilling four-run victory in Sylhet in the second ODI on Tuesday. After Tamim Iqbal's record-breaking 158 propelled Bangladesh to 322/8, Zimbabwe looked to be out of reckoning as they slipped to 225/7 in the 42nd over. But Donald Tiripano (55 off 28 balls) and Tinotenda Mutombodzi (34 off 21 balls) launched a stirring counter-attack with an eighth wicket partnership that brought 80 runs in just 7.3 overs.

Tiripano struck five massive sixes, including two in the final over, but he needed to hit another one off the final ball to secure an unlikely win. Al-Amin Hossain held his nerve at the last to seal the series for Bangladesh.

Chasing a stiff 323 for a win, Zimbabwe never looked in the chase before Tiripano and Mutombodzi joined hands. For the hosts, Taijul Islam picked up three wickets.

For the tourists, Sikandar Raza top-scored with 66 while opener Tinashe Kamunhukamwe and 19-year old Wesley Madhevere also scored 51 and 52 respectively.

Earlier, Iqbal became the first Bangladesh batsman to score 7,000 ODI runs, after he roared back to form with a crackling 158. The hosts rode his heroics to post 322/8 in 50 overs after electing to bat first. Tamim, who played his first ODI in nine months in the first match, had taken a break from cricket in the second half of 2019.

The highest Tamim has scored in his last seven innings in ODIs is just 36, but on Tuesday he looked his usual best as he took 136 deliveries to get to 158 with the help of 20 fours and three sixes. The 30-year-old has been Bangladesh's leading run-getter in one-dayers and this feat adds another feather to his cap.

Bangladesh also improved their highest total against Zimbabwe -- made just two days ago -- by a run.

Tamim Iqbal Cricket
Get the latest updates on India vs Australia Series, check out the India vs Australia Schedule for 2020-21 and Ind vs Aus live score . Like us on Facebook or follow us on Twitter for more sports updates. You can also download the NDTV Cricket app for Android or iOS.