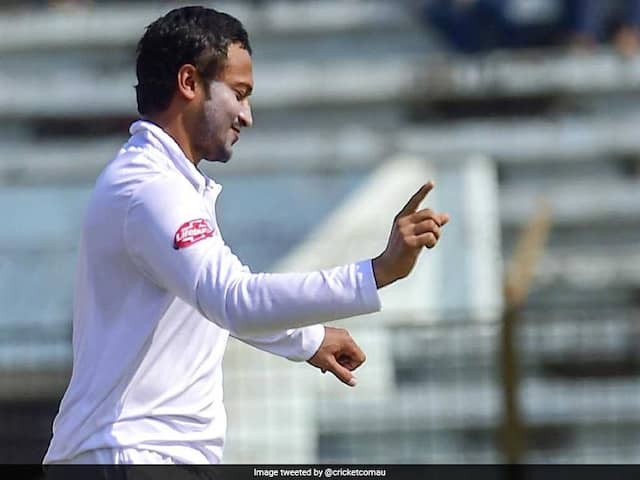 Shakib Al Hasan took two wickets on Day 3 of the first Test against the Windies.© Twitter

Bangladesh all-rounder Shakib Al Hasan on Saturday became the quickest player in Test cricket history to achieve a dual feat of taking 200 wickets and scoring 3,000 runs. The 31-year-old achieved the landmark on the third day of the first Test against the Windies in Chittagong, when he dismissed opening batsman Kieran Powell for a first ball duck in the Windies 2nd innings. Shakib surpassed England legend Ian Botham to become the fastest man to achieve the milestone. Shakib took 54 Tests to achieve the dual feat, while Botham reached the same figures in 55 matches.

The Bangladesh team also wrapped up the first Test on the third day, defeating the Windies by 64 runs to go 1-0 up in the three-match Test series.

Along with Shakib, who finished with figures of 2-30, left-arm spinner Taijul Islam ran through the visitors' batting order in the Windies second innings. Chasing a target of 204, the Caribbean team were bundled out for 139 as Taijul clinched six wickets for 33.

Earlier, Bangladesh resumed Day 3 of the first Test on 55/5 with a lead of 133 in the second innings. Windies bowlers Devendra Bishoo (4-26) and Roston Chase (3-18) bowled superbly to wrap up the Bangladesh innings on 125.

Chasing a tricky target, Windies batsmen succumbed against the Bangladesh bowling attack as spinners tore apart the Windies batting line up. Apart from Sunil Ambris (43), Jomel Warrican (41) and Shimron Hetmyer (27) no other batsmen were able to get into the double digits.

The second match of the Test series will be played at the Sher-e-Bangla National Cricket Stadium in Dhaka from November 30.

Shakib Al Hasan Cricket Bangladesh vs West Indies, 1st Test
Get the latest Cricket news, check out the India cricket schedule, Cricket live score . Like us on Facebook or follow us on Twitter for more sports updates. You can also download the NDTV Cricket app for Android or iOS.