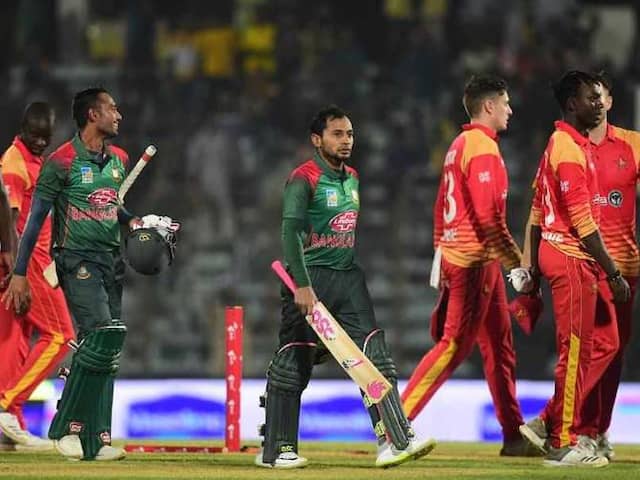 Opener Imrul Kayes and Liton Das hit big half-centuries as Bangladesh crushed Zimbabwe by seven wickets in the second one-day international to take an unassailable 2-0 lead in the three-match series in Chittagong on Wednesday. Imrul missed out on his second century in the series when he was dismissed for 90, but this was enough to help Bangladesh cruise to 250-3 in 44.1 overs after they restricted Zimbabwe to 246-6 at the Zahur Ahmed Chowdhury Stadium.

Imrul, who played a match-winning knock of 144 runs in Sunday's series opener, shared 148 runs with Liton Das in the opening stand, Bangladesh's best ODI start in 2018.

Liton chipped in with 83 off 77 balls after being reprieved on naught by the third umpire, who overturned a leg-before decision in the very first over of the innings following a television replay.

Off-break bowler Sikandar Raza dismissed Liton to break the stand and then also had number three Fazle Mahmud in his next over, but Imrul stood firm to deny Zimbabwe further momentum.

Raza also removed Imrul, who hit only seven fours in his 111-ball innings, before finishing with 3-43.

Bangladesh skipper Mashrafe Mortaza acknowledged dew in the field made their job easier.

"I think winning the toss was crucial. We knew about the dew, but it was not as much as we expected," Mortaza said.

Mushfiqur Rahim and Mohammad Mithun were unbeaten on 40 and 24 runs respectively.

Taylor added 52 and 77 runs for the second and third wicket respectively with Zhuwao (20) and Williams before Bangladesh stalled Zimbabwe's progress.

Taylor, who hit nine fours and a six in his eighth fifty against Bangladesh, the highest by any cricketer, also benefited from a television replay as he was reprieved on 42 after being given out leg before wicket initially.

Zimbabwe's Masakadza lamented their inability to capitalise on a good start.

"We didn't manage to kick on after the kind of start. Credit to Bangladeshi bowlers for starving us at the death," he said.

Rookie all-rounder Mohammad Saifuddin finished with the most impressive figures of 3-45 for the home side and was named man of the match.

The third and final match of the series will also be held at the same ground on Friday.

Zimbabwe Cricket Team Cricket
Get the latest Cricket news, check out the India cricket schedule, Cricket live score . Like us on Facebook or follow us on Twitter for more sports updates. You can also download the NDTV Cricket app for Android or iOS.