Bangladesh selectors on Monday recalled fast bowler Mashrafe Mortaza for next month's one-day series against Australia after he missed the World Cup with a knee injury. 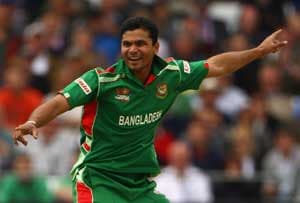 Bangladesh selectors on Monday recalled fast bowler Mashrafe Mortaza for next month's one-day series against Australia after he missed the World Cup with a knee injury.

Mortaza, 27, who has 145 wickets in 116 one-day internationals, watched from the sidelines as the Tigers crashed out in the first round of the tournament they co-hosted with India and Sri Lanka.

Uncapped batsman Shuvagoto Hom and all-rounder Alok Kapali were the surprise inclusions in the 14-man squad that will play Australia on April 9, 11 and 13 at the Sher-e-Bangla stadium in Dhaka.

Kapali, who played the last of his 65 one-dayers in September, 2008, was brought back to bolster the misfiring middle-order that caused Bangladesh's early exit from the World Cup.

The Tigers were dismissed for their lowest one-day total of 58 by the West Indies and fell for 78 against South Africa in the league matches.

Among the four players dropped from the 15-man World Cup squad was former captain Mohammad Ashraful, who managed just 18 runs in three matches.

Junaid Siddique, Naeem Islam and Nazmul Hossain were the other World Cup players to be omitted.

Comments
Topics mentioned in this article
Cricket Bangladesh Cricket Team Mashrafe Mortaza
Get the latest updates on ICC T20 Worldcup 2022 and CWG 2022 check out the Schedule, Live Score and Medals Tally. Like us on Facebook or follow us on Twitter for more sports updates. You can also download the NDTV Cricket app for Android or iOS.