Bangladesh won the fourth T20 international against New Zealand by six wickets in Dhaka on Wednesday to secure victory in their five-match series. 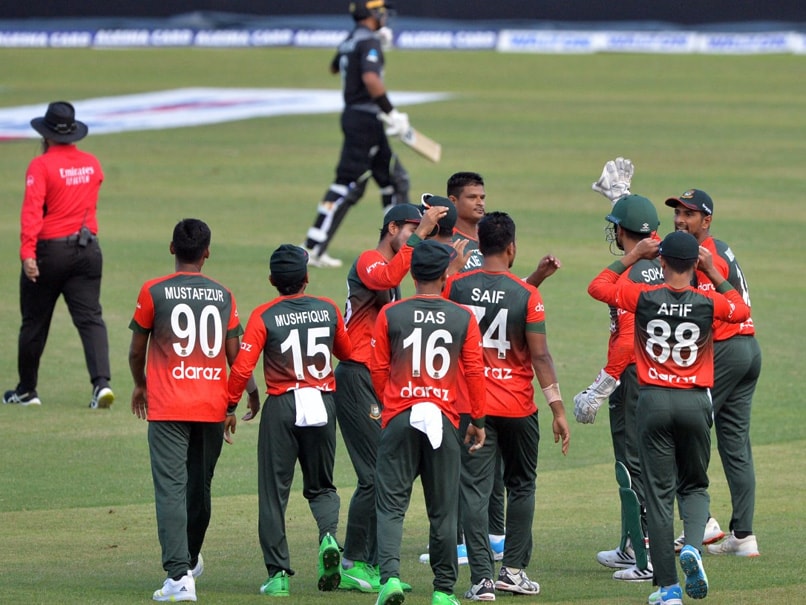 Bangladesh cruised to a comfortable six-wicket win over New Zealand after a dominant show with the ball.© AFP

Skipper Mahmudullah Riyad struck an unbeaten 43 as Bangladesh defeated New Zealand by six wickets in the fourth Twenty20 international to seal the five-match series 3-1 in Dhaka on Wednesday. Mahmudullah guided the hosts 96-4 in 19.1 overs after four wickets each from left-arm spinner Nasum Ahmed and left-arm pacer Mustafizur Rahman helped them bowl out New Zealand for 93 runs in 19.3 overs. The visitors sniffed a chance once off-spinner Cole McConchie dismissed opener Liton Das (six) early and left-arm spinner Ajaz Patel struck twice in the same over to leave Bangladesh stuttering at 32-3.

Patel dragged Shakib Al Hasan (eight) out of his crease for a stumping and bowled Mushfiqur Rahim for a duck three balls later in the sixth over of the innings.

Mohammad Naim and Mahmudullah steadied the innings with 35 runs in the fourth wicket to put Bangladesh back in control.

But Mahmudullah denied New Zealand further opportunity and sealed the contest with a six and four in successive overs to give Bangladesh their first ever series win over New Zealand in Twenty20 format.

Mahmudullah hailed the bowlers for the win.

"The bowlers did a great job once again to keep New Zealand to a low total. All the bowlers, Nasum, Mahedi, Mustafizur, bowled well. The batters tried their best," he said.

"We just needed a good partnership in the middle and Naim and I tried that."

Man of the match Nasum earlier picked up his career best 4-10 to dismantle New Zealand's top-order before Mustafizur mopped up the tail with 4-12.

Will Young held one end to make 46 off 48 balls but he lacked support from the other end before being dismissed by Mustafizur in the final over of the innings.

"We were looking at 100-110 but credit to Bangladesh. They batted (well). After a couple of early wickets, they had it under control. The way Mahmudullah finished, credit to them," he said.

The fifth match of the series will be held on Friday at the same ground.

Mahmudullah Cricket
Get the latest updates on IPL Auction 2023 and check out  IPL 2023 and Live Cricket Score. Like us on Facebook or follow us on Twitter for more sports updates. You can also download the NDTV Cricket app for Android or iOS.