Bangladesh vs West Indies: Four players hit fifties as Bangladesh made light work of the West Indies to record a 120-run win in the third ODI to sweep the series 3-0. 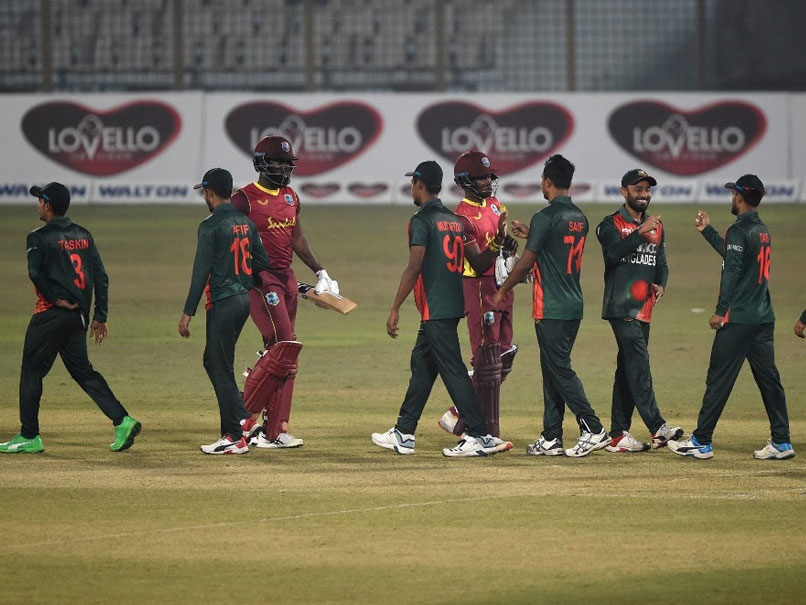 Four players hit fifties as Bangladesh made light work of the West Indies to record a 120-run win in the third one-day international in Chittagong Monday to sweep the series 3-0. The home side bowled out a weakened Windies for 177 runs after half-centuries from Tamim Iqbal, Mushfiqur Rahim, Mahmudullah Riyad and Shakib Al Hasan powered them to 297-6 in 50 overs.

The West Indieswere all out in 44.2 overs with Rovman Powell top-scoring with 47 off 49 balls.

Tamim and Mushfiqur earlier struck 64 runs each, while Shakib made 51 and Mahmudullah Riyad put an unbeaten 64 off 43 balls.

"It has been fantastic for us. The hunger that the whole group showed was amazing," Tamim said after the match.

"Coming to international cricket after 10 months, the effort the boys put (in) was amazing."

Sent in to bat first, Bangladesh -- which have now won eight consecutive ODIs against the West Indies -- suffered an early blow when Liton Das fell leg before wicket to Alzarri Joseph in the first over.

Kyle Mayers dismissed Najmul Hossain in an identical manner after the left-hander made 20 runs.

Tamim and Shakib put on 93 for the third wicket before Joseph ended their partnership, getting Tamim caught by Akeal Hosein at mid-wicket.

Shakib was bowled by Raymon Reifer shortly after his 50, ending a 48-run stand with Mushfiqur.

Mushfiqur and Mahmudullah then added 72 for the fifth wicket before Reifer struck again.

Joseph took a catch at cover and the wicketkeeper-batsman departed after four fours and two sixes in his 55-ball innings.

The West Indies never managed to get going with the bat after Mustafizur dismissed two openers Kjorn Ottley (one) and Sunil Ambris (13) early.

Kyle Mayers (11) fell to Mehidy before Saifuddin who was playing his first match in the series ended the resistance of Nkrumah Bonner (31) and skipper Jason Mohammed (17).

Powell top-scored with 47, but Bangladesh patiently waited to complete the win.

The hosts won the first two matches of the series in Dhaka, by six wickets and seven wickets respectively.

"We were a bit far away in all the three games. The bowling did OK, today maybe 30 runs too many. The batting didn't work at all," said Windies captain Jason Mohammed.

His team came to the tournament short of at least eight players after several of them skipped the matches over coronavirus fears, while one tested positive for the infectious disease.

The two teams will play two Test matches in February.

Shakib Al Hasan Cricket
Get the latest updates on IPL Auction 2023 and check out  IPL 2023 and Live Cricket Score. Like us on Facebook or follow us on Twitter for more sports updates. You can also download the NDTV Cricket app for Android or iOS.