Bangladesh vs West Indies: The West Indies claimed three quick wickets in the second innings, to restore some parity in the first Test against Bangladesh in Chittagong. 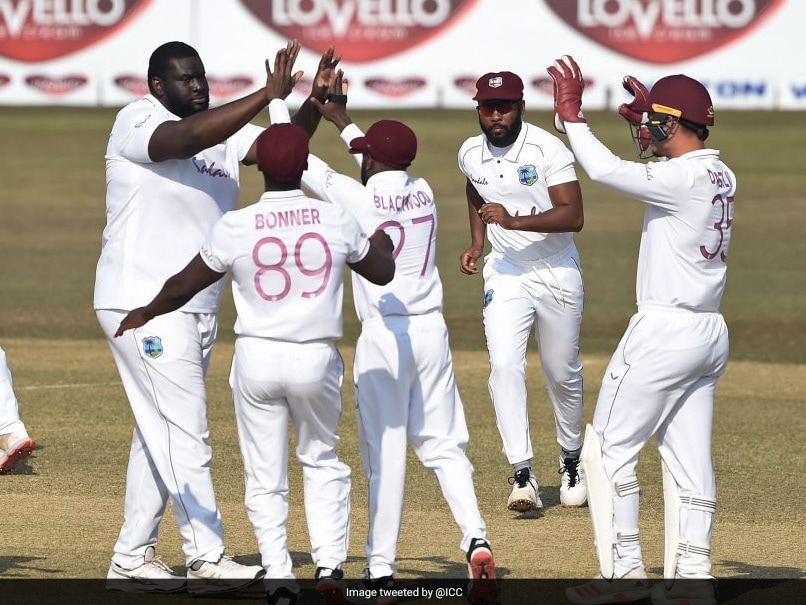 The West Indies claimed three quick wickets in the second innings, to restore some parity in the first Test against Bangladesh in Chittagong on Friday. The hosts on the third-day stumps reached 47-3, stretching their 171-run first-innings lead to 218 after bowling out the West Indies for 259 runs earlier in the day. The Windies, after losing the last five wickets for only six runs after Kraigg Brathwaite smashed 76 and Jermaine Blackwood added 68, hit back almost immediately through spinner Rahkeem Cornwall.

The right arm off-break removed opener Tamim Iqbal and one-down Najmul Hossain for ducks, in the second over of the innings before Shannon Gabriel bounced out the other opener Shadman Islam for five runs.

Skipper Mominul Haque stemmed the rot to stay 31 not out at close, alongside Mushfiqur Rahim (10*).

The early fifties of Brathwaite and Blackwood gave the West Indies hopes of going close to Bangladesh's innings total of 430, before their first innings came to an abrupt end.

Mehidy Hasan, who scored the highest runs with 103 in Bangladesh's first innings, triggered the collapse to finish with 4-58 as the West Indies were bowled out soon after the tea break.

The visitors owed their total to Blackwood who shared a 99-run partnership with Joshua Da Silva (42), for the sixth wicket to help them recover from 154-5.

Off-spinners Nayeem Hasan and Mehidy dismissed Da Silva and Blackwood in successive overs, just before the break to end their resistance.

Da Silva, who was dropped by Najmul off Taijul Islam at 24, edged Nayeem to wicketkeeper Liton Das in the penultimate over of the session.

Blackwood, who faced 146 balls and struck nine boundaries, fell in the next over, edging Mehidy to Liton down the leg.

Brathwaite earlier provided the West Indies with some momentum, after they lost three crucial wickets in the morning session.

Resuming on 75-2, the West Indies suffered a blow in the first ball of the day, when left-arm spinner Taijul removed Nkrumah Bonner for 17.

Taijul spun the length ball sharply to take the outside edge of Bonner, who attempted to defend but ended up giving a catch to Najmul at first slip.

Brathwaite and debutant Kyle Mayers put on 55 runs for the fourth wicket, before an error of judgement cost the West Indies skipper his wicket.

Brathwaite wanted to leave the ball from Nayeem but it spun more than he expected, smashing onto his off-stump.

Bangladesh were one bowler short on the third day, after Shakib Al Hasan picked up a fresh groin injury. He appears unlikely to participate further in the game.

Shakib Al Hasan Kraigg Brathwaite Cricket
Get the latest updates on ICC T20 Worldcup 2022, check out the Schedule and Live Score. Like us on Facebook or follow us on Twitter for more sports updates. You can also download the NDTV Cricket app for Android or iOS.