Mitchell Starc ended with 5-46, taking 10 wickets in the game as he emphatically bounced back from a lean spell. 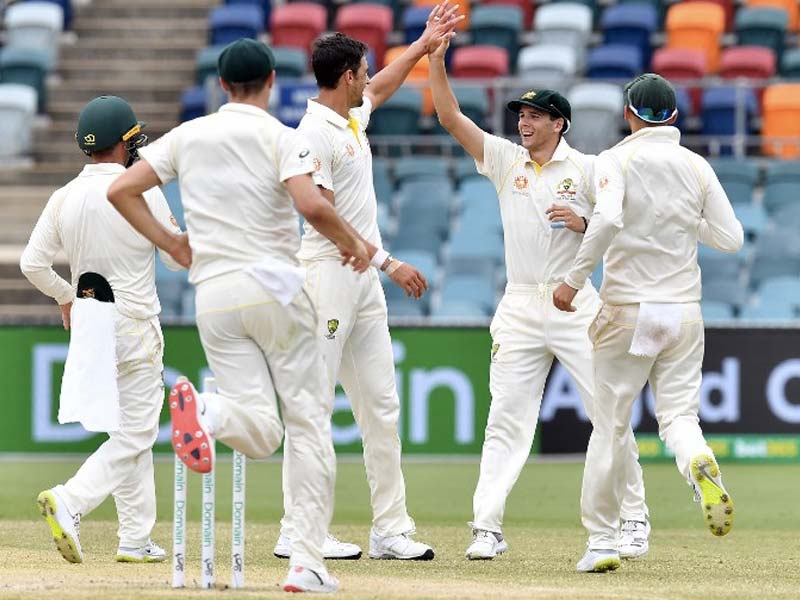 A resurgent Mitchell Starc took five wickets as Australia wrapped up a confidence-boosting 2-0 series thrashing of Sri Lanka Monday, with the tourists skittled for 149 in the second Test at Canberra. In front of a sparse crowd on day four, Sri Lanka resumed on 17 without loss, needing a daunting 516 to win and ending 366 short. There was little resistance from the under-strength visitorswho wilted under a pace onslaught led by spearhead Starc, who ended with 5-46 and took 10 wickets in the game as he emphatically bounced back from a lean spell. "It's nice to get some reward. I've said all summer this group has been working really hard," said skipper Tim Paine. "I think we're starting to build towards something so it's great to get some reward for the work we've been putting in." He was especially pleased with his bowlers, who worked well as a unit.

"The wicket didn't offer a lot but they kept smacking away and bowled beautifully. For our group to get some belief out of this will be excellent moving forward." Paine set the big run chase after declaring Australia's second innings at 196 for three, following their mammoth first innings 534 for five declared. Sri Lanka were bowled out for 215 in reply.

"We were outplayed as a team in all departments," Sri Lankan skipper Dinesh Chandimal said. "Credit goes to Australia. They have played some outstanding cricket throughout the series," he added.

"It was really tough. Especially in the last six months we couldn't get the right combination to finalise our best XI." Dimuth Karunaratne and Lahiru Thirimanne had survived a tough six overs on Sunday ahead of stumps, and they resumed with hopes high of taking the game into a fifth day to provide momentum ahead of an upcoming Test tour to South Africa.

But Karunaratne failed to add to his overnight eight with Starc, bowling at close to 145 kph (90 mph), clipping his leg bail in only the third over of the day. It was a big blow with the experienced opener their best batsman in the first innings before he was struck in the head by a Pat Cummins bouncer.

Chandimal also failed to deliver, struggling against the speed and bounce of a fired-up Starc, bowling at perhaps his best over the past year.

He poked at an away swinger and was caught at slip for four by Marnus Labuschagne, capping a miserable series in which he managed just 24 runs in two Tests.

Niroshan Dickwella, promoted to number four from his usual six, was building a handy partnership before Thirimanne was removed by Cummins for 30.

Thirimanne tried to fend off a short ball but it ricocheted off his bat and Cummins took an athletic diving catch.

It went from bad to worse with Dickwella bowled by Starc for 27 just before lunch and Kusal Perera, cleared to play after taking a hit on the helmet on Sunday, out for a golden duck next ball.

It extended a dire run of Test results for troubled Sri Lanka, who were missing their three injured strike bowlers in Canberra. They have now lost a home series to England 3-0, then away to New Zealand 1-0 to go with their two defeats in Australia. Australia won the first Test in Brisbane by an innings and 40 runs and end their summer on a high after losing an intense home series against top-ranked India. While they were outplayed by Virat Kohli's men, they at least broke a century drought stretching back to October in Canberra, with Joe Burns, Travis Head, Kurtis Patterson and Usman Khawaja all cashing in.

Their knocks put them in prime position for the Ashes tour to England -- their next Test assignment later this year, where champion seam bowlers Jimmy Anderson and Stuart Broad await.

Starc's Canberra performance cemented his place in the side, while Richardson emerged as a handy compliment to fellow pace bowlers Josh Hazlewood and Cummins.

Mitchell Starc Cricket
Get the latest updates on IND vs NZ 2021, check out the Schedule and Live Score . Like us on Facebook or follow us on Twitter for more sports updates. You can also download the NDTV Cricket app for Android or iOS.