The officer caught the ball, held it on his chest but unable to keep his balance, he fell on the ground. 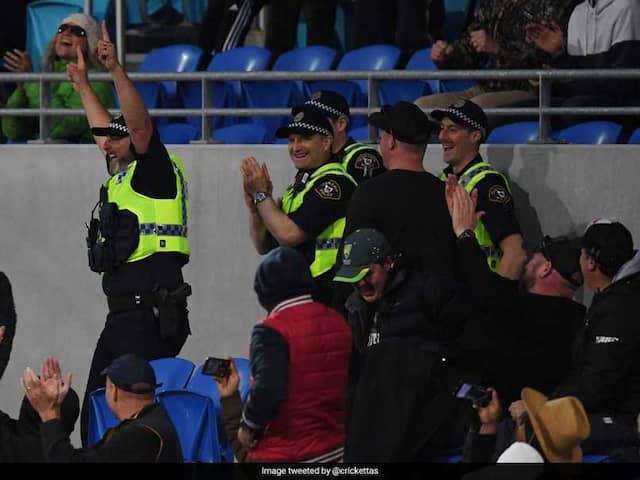 An officer of Tasmania Police caught Shaun Marsh's six in the stands.© Twitter

Australia batsman Shaun Marsh struck his sixth One-day international (ODI) century during the third match against South Africa at the Bellerive Oval in Hobart on Sunday. During his innings, Shaun Marsh hit seven boundaries and four towering sixes, most of which was missed by the fans in the crowd. However, one among the four sixes was caught by an officer of Tasmania police, who hilariously tumbled over after completing the catch. The incident that occurred in the 30th over when Marsh read the short-pitch delivery from Dwaine Pretorius and pulled it with authority. The officer caught the ball, held it on his chest but unable to keep his balance, he fell on the ground.

Cricket Australia took to Twitter and uploaded a video of the catch. The video also featured other catches that were missed by the fans.

CLASSIC! The local fans were having all sorts of catching problems today, until old mate Frank stepped up to save the day! Outstanding.#AUSvSA @bet365_aus pic.twitter.com/fRUmsmyLfb

On the match front, Australia won the toss and put South Africa into bat. The decision did not pay off as South Africa captain Faf du Plessis and David Miller hit brilliant centuries to power the hosts to a big total of 320/5. Du Plessis during his 114-ball 125, hit 15 boundaries and two sixes.

For South Africa, Dale Steyn and Kagiso Rabada shared six wickets between them.

Earlier during the second ODI, South Africa batsman Aiden Markram sized up a 150.8km/h delivery from Australia's Mitchell Starc and dispatched it for a mammoth six. To everyone's amusement, an alert fan cleanly caught the monster six, that flew 95 metres into the stand.