Watch: Pat Cummins' Reaction After David Miller's Dismissal Will Leave You In Splits

While the Australian players celebrated the dismissal of David Miller, Pat Cummins looked shocked after the third umpire's decision. 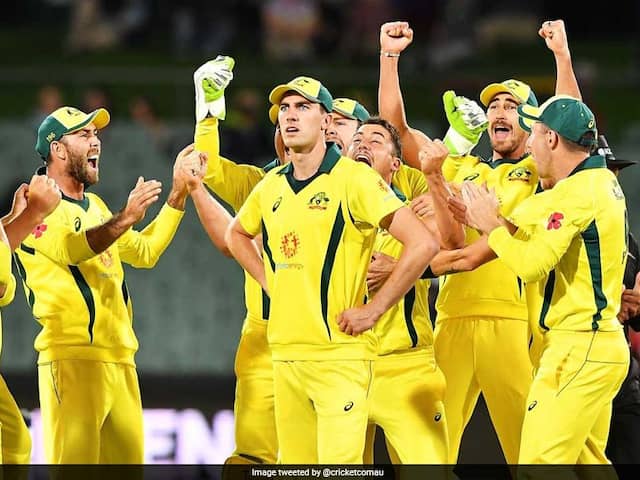 Pat Cummims looked in shock after David Miller was ruled out by the third umpire.© Twitter

Australia registered a thrilling seven-run victory against South Africa in the second One-day International (ODI) at the Adelaide Oval on Friday. The nail-biting contest witnessed terrific on-field action from both the teams. Australia's Pat Cummins reaction to one of the dismissals during the Proteas' run-chase grabbed eye balls. The bizarre incident took place in the 44th over of the South African innings when Australia went for an LBW review against David Miller. The left-hander was trapped in front of the stumps by Marcus Stoinis but was originally ruled not out. Skipper Aaron Finch went for the review and the third umpire over-turned the decision of the on-field umpire. During the long-pending decision the Australian camp was curiously looking at the big screen. Soon after the decision was displayed on the screen, the whole team went up for celebration except Pat Cummins, who surprisingly continued to look at the screen.

Here's how fans reacted on Twitter after Cummins' bizzare look.

Pat is cracking me up! He can't believe it

like as if he is big fan of Miller.

A combined batting effort from the middle order along with a three-wicket haul from Stoinis helped Australia level the series 1-1 against the Proteas. Aaron Finch (44), Chris Lynn (47) and wicket-keeper Alex Carey (47) helped Australia post 231 runs on the board before being bowled out in the 49th over.

Stoinis was the pick of the bowlers for Australia, ending the match with figures of 3/35. Pacers Mitchell Starc and Josh Hazlewood grabbed two wickets each. David Miller (51) and skipper Faf du Plessis (47) were the top scorers for South Africa.

The final match of the ODI series will played in Hobart on Sunday.

David Miller Cricket Australia vs South Africa, 2nd ODI
Get the latest Cricket news, check out the India cricket schedule, Cricket live score . Like us on Facebook or follow us on Twitter for more sports updates. You can also download the NDTV Cricket app for Android or iOS.