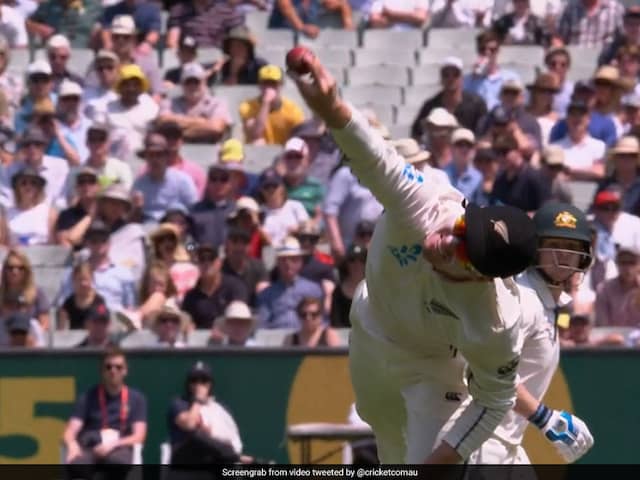 Steve Smith looked primed to score another century, his 27th in Test cricket and his fifth in as many Tests at the Melbourne Cricket Ground, but fell 15 runs short all thanks to an absolutely stunning catch from Henry Nicholls on Day 2 of the Australia vs New Zealand 2nd Test. Steve Smith's knock was not the most fluent one but it was certainly patient, scoring 85 off 242 balls. New Zealand pacer Neil Wagner had troubled the Australian maestro with some sharp bouncers and finally got the better of him when a short delivery ballooned off Steve Smith's bat handle and glove with Henry Nicholls taking a brilliant one-handed catch at gully.

Here is the video of Steve Smith's wicket:

Steve Smith's wicket didn't dampen Australian spirits as the packed MCG witnessed a fine sixth wicket partnership between captain Tim Paine and Travis Head. At Tea on Day 2, the duo had put on a 147-run partnership to put the hosts in complete control of the second Test.

Travis Head was batting on 98 while skipper Paine was unbeaten on 77 when the second session of the day ended.

Australia resumed at 257 for four with Smith on 77 and Head not out 25 under clear skies on a hot day.

It was slow going as pace spearheads Trent Boult, Tim Southee and Wagner kept them in check, with Smith adding just eight runs to his overnight score in more than an hour before he was out.

Mitchell Santner, though, was a major disappointment for New Zealand, going wicketless after bowling 19 overs.

The visitors need to win to square the three-match series after crashing in the opening day-night clash in Perth by 296 runs.

Henry Nicholls Australia vs New Zealand, 2nd Test Cricket
Get the latest Cricket news, check out the India cricket schedule, Cricket live score . Like us on Facebook or follow us on Twitter for more sports updates. You can also download the NDTV Cricket app for Android or iOS.