New Zealand were dismissed for 171 and were beaten by 296 runs, the last five wickets falling in a hurry for just 17 runs. 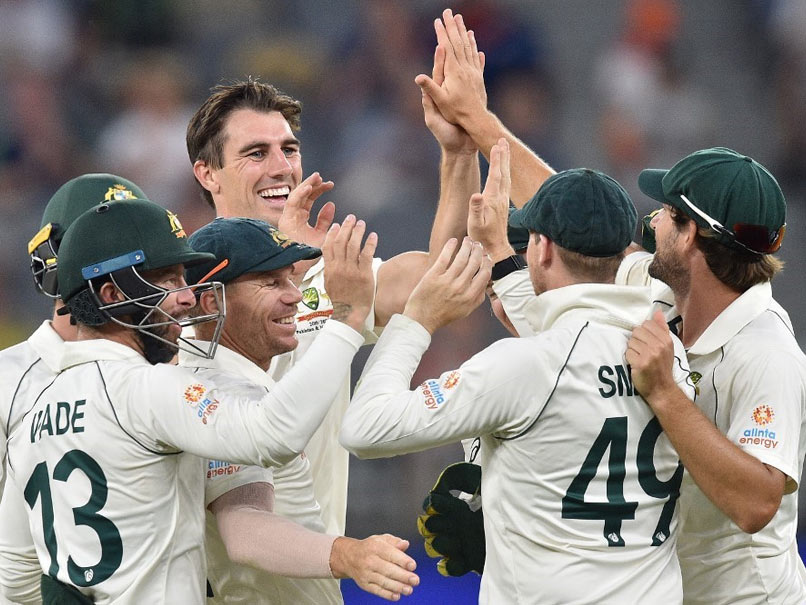 Australia recorded one of their biggest wins over New Zealand on the fourth day of the first Test at Perth Stadium on Sunday. Having trailed by 250 runs on the first innings the Kiwis were set a mammoth 468 to win - which would have been a record chase in Test cricket -- on a deteriorating pitch after Australia declared at 217 for nine in their second innings. The visitors were never in contention after losing their first wicket with just six runs on the board and were unable to push the match into a fifth day after Mitchell Starc and Pat Cummins cleaned up the Kiwi tail under lights in Perth's first ever day-night Test.

New Zealand were dismissed for 171 and were beaten by 296 runs, the last five wickets falling in a hurry for just 17 runs.

It was just one run shy of their biggest losing margin to Australia -- in runs -- in a match where both teams batted twice.

Australia's biggest win, other than innings victories, was 297 runs in Auckland in 1974.

Starc (4-45), who claimed nine wickets for the match, and Cummins (2-31) used the pink ball to good effect under lights to bring the match to a quick conclusion after none of the recognised Kiwi batsmen offered significant resistance.

The chase started poorly, with opener Jeet Raval making just one before being caught at gully by Nathan Lyon (4-63) from the bowling of Starc.

Star batsman and captain Kane Williamson then made just 14, before falling to Lyon's first ball of the innings.

Williamson got off to a fast start with boundaries from the first two balls he faced, but was caught at short leg fending a ball that bounced and turned sharply off his glove into the hands of Matthew Wade.

Ross Taylor was their last real hope of making a revival but on 22 he tried to pull a Starc delivery and got a bottom edge through to wicketkeeper Tim Paine to give the left-arm quick his seventh wicket of the match.

Tom Latham showed plenty of application to face 68 balls for his 18, but was given out leg before wicket to Lyon after an Australian DRS review, with umpire Aleem Dar initially giving him not out.

BJ Watling attempted to stem the tide with a gritty 40 and enjoyed a bit of luck as Australia didn't review when he got a faint outside edge through to Paine.

Smith then dropped a tough chance off the bowling of Lyon at first slip.

He was given out on review caught down leg side by Paine off the bowling of Starc after umpire Nigel Llong had turned down the appeal -- a dismissal that signalled the end of the Kiwi resistance.

Earlier, Australia's second innings fell away dramatically after being 131 for one at one stage on the third day.

The home team lost seven wickets for 58 runs, as they struggled against a sustained barrage of short-pitched bowling on another hot Perth day.

Tim Southee again impressed with 5-69, after also picking up four wickets in the first innings.