Australia vs New Zealand: Steve Smith Takes One Of The Best Catches You'll Ever See. Watch

Steve Smith has taken some fine catches in the slip cordon but the one taken in Perth on Friday would rate among his best. 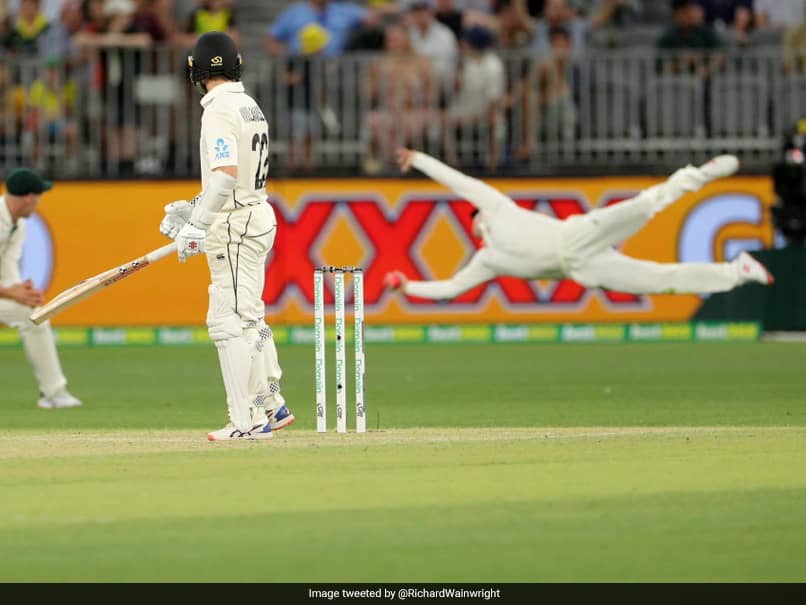 Steve Smith, whose main job is to score massive volumes of runs, is a super entertaining act in the slip cordon too. Although he has taken number of stunning catches in his career, the one in Perth on Friday can simply be rated his best for far. Late on Day Two of the first Test between Australia and New Zealand, Steve Smith dazzled the already-lit Optus Stadium with his sensational catch. Stationed at second slip, the former Australia captain flew to his right, stretching every muscle in his body, to complete an unbelievable catch to remove New Zealand skipper Kane Williamson off Mitchell Starc.

Soon, Twitter was flooded with praises for Steve Smith's superhuman athleticism in the field.

CATCH OF THE SUMMER

Whoa one of the finest catches you'd see in the slip cordon. Steve 'Flying' Smith. https://t.co/8xN5OBgUoz

OMFG!! That's one of the best catches I've ever seen! @stevesmith49

We're sure we've seen that somewhere before pic.twitter.com/IfRKTuqFLC

is it a bird? is it a plane? no its steve smith taking a marvelous catch

Interestingly, since November 2015, Smith has taken 88 catches in 38 Tests.

Smith has such extraordinary numbers despite being suspended from cricket for 12 months due to his involvement in the infamous ball-tampering scandal in South Africa in 2018.

As far as the match is concerned, Australia skipper Tim Paine opted to bat after winning the toss in the day-night Test.

Steve Smith had an average outing with the bat as he managed to score just 43 runs.

The hosts' innings was anchored by Marnus Labuschagne, who scored his third consecutive Test century, as Australia posted 416 runs in the first innings.

In reply, New Zealand were reeling at 109/5 after 32 overs, still trailing Australia by 307 runs at stumps.