Watch: Anil Kumble Became Second Bowler To Take 10 Wickets In Test Innings On This Day In 1999

On this day in 1999, Anil Kumble became just the second bowler in the history of cricket to take all ten wickets in an innings of a Test match. 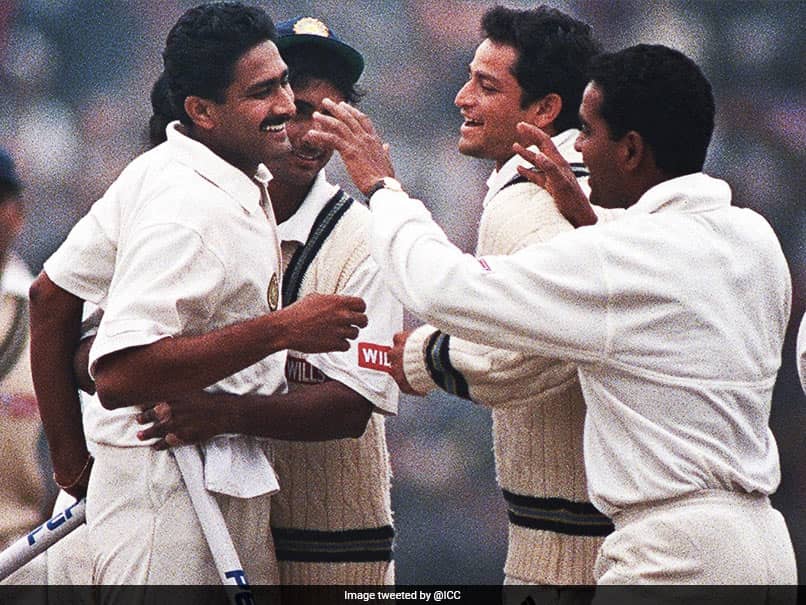 Anil Kumble finished with the bowling figures of 10/74 from 26.3 overs.© Twitter

It was on February 7, 1999, that Anil Kumble became just the second bowler in the history of cricket to take all ten wickets in an innings of a Test match. He achieved the feat against Pakistan at Feroz Shah Kotla Stadium, now known as Arun Jaitley cricket stadium in Delhi, during the second Test of the two-match series.

#OnThisDay in 1999, #TeamIndia spin legend @anilkumble1074 became the first Indian bowler and second overall to scalp all the 10 wickets in a Test innings.

India had set Pakistan a target of 420 runs in the match and the visitors got off to a steady start as openers Shahid Afridi and Saeed Anwar put on 101 runs for the first wicket.

Kumble came into the attack and tormented the Pakistani batting line-up. The spinner, also known as 'Jumbo' first dismissed Afridi (41) in the 25th over.

This effort guided India to 212-run victory and Kumble became the second bowler after England's Jim Laker to take all ten wickets in one Test innings. Kumble finished with the bowling figures of 10/74 from 26.3 overs.

A legend of the game, Kumble had announced his retirement from international cricket in 2008. He finished with 619 wickets in the longest format of the game.

He has the third-highest number of wickets (619) in Tests, only behind Sri Lanka's Muttiah Muralitharan (800) and Australia's Shane Warne (708).

Kumble is currently the head coach of Kings XI Punjab in the Indian Premier League (IPL).

Feroz Shah Kotla, Delhi Cricket
Get the latest updates on IPL 2021, IPL Points Table , IPL Schedule 2021 , live score . Like us on Facebook or follow us on Twitter for more sports updates. You can also download the NDTV Cricket app for Android or iOS.