All-rounder Mohammad Nabi was adjudged the player of the match for his all-round performance. 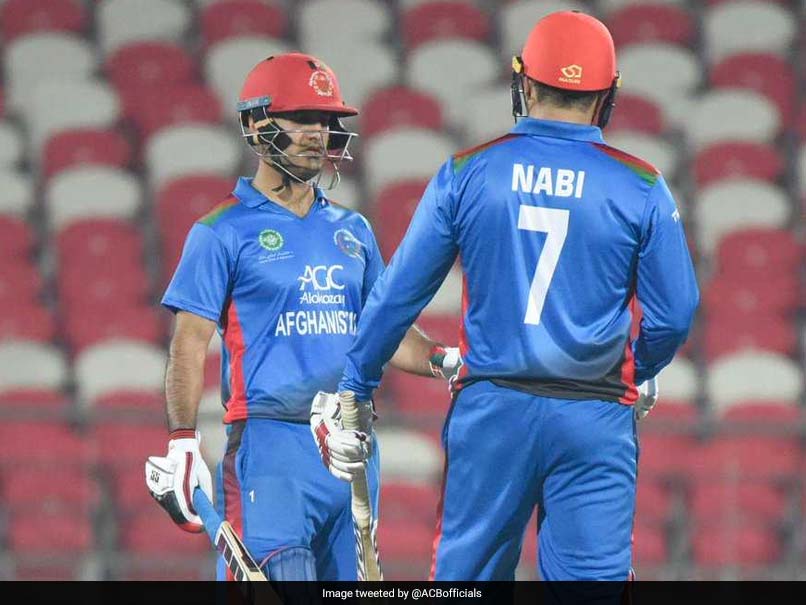 Mohammad Nabi and Najibullah Zadran put together an unbeaten 86-run partnership for the sixth-wicket.© Twitter

Mohammad Nabi and Najibullah Zadran stitched an unbeaten 86-run stand for the sixth-wicket as Afghanistan registered a five-wicket win against Ireland in the first T20 International in Dehradun. All-rounder Mohammad Nabi was unbeaten on 49 runs off 40 balls as Afghanistan chased down the small target with four balls to spare and took a 1-0 lead in the three-match series. Nabi struck five boundaries and a six in his entertaining knock. On the other hand, number seven batsman Zadran contributed with an unbeaten knock of 40 runs. Zadran's 36-ball knock was decorated by three boundaries and a six.

Afghanistan were in trouble after being reduced to 50/5 but the left-right batting pair of Nabi and Zadran ensured their team's eighth consecutive T20 win over Ireland.

EarlierIrelandrecovered from a precarious 65 for six to bolster their total after electing to bat first in Afghanistan's adopted home ground.

George Dockrell, who made 34, and wicketkeeper-batsman Stuart Poynter, who scored 31, put on an unbeaten 67-run stand.

Khan, the world's top-ranked T20 bowler, weaved his magic in his very first over, taking two wickets in the space of three deliveries as Ireland slipped to 65 for six in the 12th over.

The batting duo played the Afghanistan spinners with aplomb and then counter-attacked in the last five overs to get 47 runs from the final 30 deliveries.

Nabi returned an impressive 2/16 in four overs of off-spin.

The second match will be played on Saturday in Dehradun.

Ireland Cricket Team Cricket
Get the latest updates on IPL Auction 2023 and check out  IPL 2023 and Live Cricket Score. Like us on Facebook or follow us on Twitter for more sports updates. You can also download the NDTV Cricket app for Android or iOS.