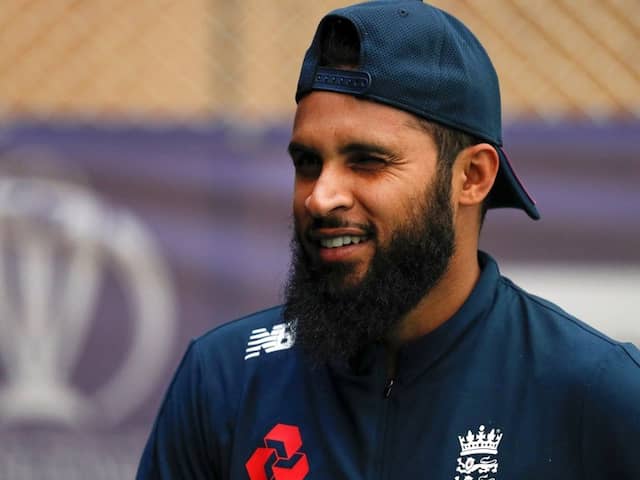 Adil Rashid has said it would be "lovely" to play in the 2023 World Cup.© AFP

Adil Rashid has said it would be "lovely" to play in the 2023 World Cup even though the leg-spinner will have turned 35 by the time England defend their title. Persistent shoulder trouble has been a problem for Rashid, who needed pain-killing injections while helping England win their first men's World Cup title on home soil last year. Nevertheless, Rashid told reporters in a conference call on Saturday: "My aim is to play for England as long as possible.

"We don't know how long that could be. Months, years, or whatever it is

"I have a vision in terms of maybe achieving that, the 2023 World Cup would be lovely.

"If I stay fit, if my shoulder gets stronger then I can hopefully play for a long time."

The Yorkshireman was an ever-present during last year's World Cup, although his 11 tournament wickets came at an expensive average of 47.81 apiece.

But even though he wasn't fully fit, "top-drawer" England captain Eoin Morgan never lost faith in his leg-spinner.

"He knew the shoulder wasn't great, but he kept backing me," said Rashid.

"I went in there with a strong mindset and did a decent job. That shows when I am 100 percent everything else will hopefully work out better."

Rashid has, however, repeatedly taken important wickets, a quality he demonstrated again as he won the man-of-the-match award for a return of three for 52 against South Africa in Johannesburg in February that included Temba Bavuma and Quinton de Kock.

And with the next World Cup set to be played in India, where pitches traditionally favour spinners, Rashid could be an even greater threat.

"South Africa was a big turning point for me," he said. "In South Africa the shoulder was stronger."

Looking ahead, Rashid said the fact all senior cricket worldwide was currently suspended because of the coronavirus outbreak had not led him to change his mind about remaining a white-ball specialist should the 2020 English season get underway.

But Rashid, a veteran of 19 Tests, said he would "reassess" in September, leaving open the possibility of a bid for a place in England's squad for the 2021/22 Ashes in Australia.

"If I don't make that decision of playing red-ball and just sticking to white-ball then there's no Ashes or whatever for me.

Meanwhile, Rashid, one of the most high-profile Muslim sportsmen in Britain, said it was vital government guidance on social distancing designed to stop the spread of the coronavirus was "abided by regardless" of the fact Ramadan, traditionally a time for communal gathering, starts next week.

"Meeting up with family and friends is not the question with what is going on in the world right now," he said.

"The main thing is for us to stay at home, stay safe and look after each other."

Adil Rashid Cricket
Get the latest Cricket news, check out the India cricket schedule, Cricket live score . Like us on Facebook or follow us on Twitter for more sports updates. You can also download the NDTV Cricket app for Android or iOS.