Sublime centuries by openers Dickwella and Gunathilaka gave the hosts an eight-wicket win over Zimbabwe in the third ODI. 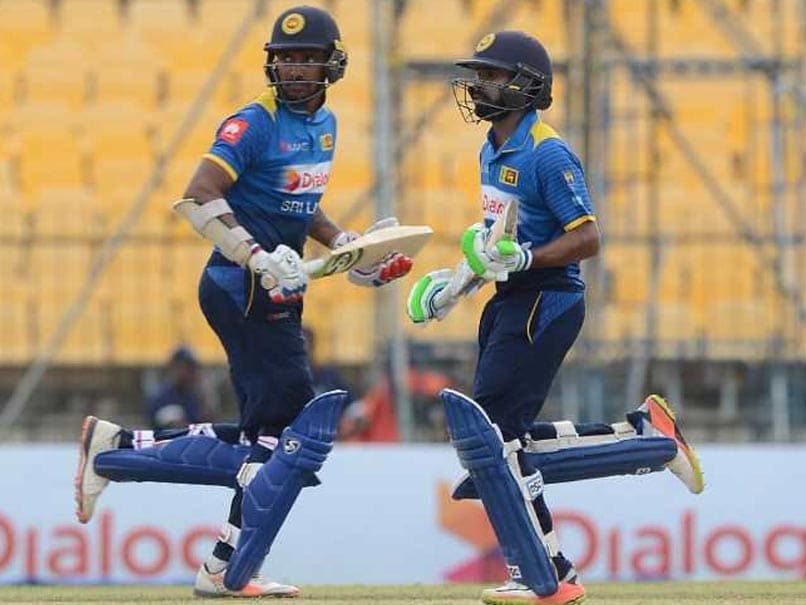 Openers Niroshan Dickwella and Danushka Gunathilaka hit sublime centuries to help Sri Lanka humble Zimbabwe by eight wickets in the third one-day international in Hambantota on Thursday. Chasing 311 for victory, the hosts rode on a 229-run opening stand between Dickwella (102) and Gunathilaka (116) to canter home in 47.2 overs and earn a 2-1 lead in the five-match series. The left-handed batting duo got their maiden ODI hundreds to overshadow Zimbabwe opener Hamilton Masakadza's sparkling 111 in the visitors' 310-8 after being put into bat first.

While wicketkeeper-batsman Dickwella hit 14 boundaries during his stay, Gunathilaka smashed 15 fours and a six to flay the Zimbabwe attack at the Mahinda Rajapaksa International Cricket Stadium.

"It was a fantastic effort by the boys. After losing the first game, we had our backs against the wall and we came back well," Sri Lanka skipper Angelo Mathews said. "The way Dickwella and Gunathilaka batted, we could have chased 350 on that wicket," he said of his team that hunted down a 300-plus run target for the first time on home soil.

Off-spinner Malcolm Waller got Dickwella trudging back to the pavilion and left-arm orthodox Sean Williams cleaned up Gunathilaka, who received the man of the match award, in an otherwise disappointing show by the Zimbabwe bowlers.

Upul Tharanga (44) and Kusal Mendis (28) then steered the team home with an unbeaten 75-run stand as the batting duo survived a dropped catch each as fielding lapses also hurt the visitors.

"The bowlers came back pretty well after the start that they (Zimbabwe) got. Hamilton played brilliantly, credit should go to him as well but the bowlers did well to keep them to 310," said Mathews.

Earlier Masakadza put on a crucial 127-run partnership for the second wicket with Tarisai Musakanda (48) before Sri Lankan bowlers struck back to check Zimbabwe's surge.

Masakadza's 98-ball knock, laced with 15 fours and a six, had Zimbabwe eyeing 350-plus at one point before a middle-order collapse pulled them back.

Teenage leg-spinner Wanindu Hasaranga, who took a hat-trick on his ODI debut in the second match in Galle, and paceman Asela Gunaratne grabbed two wickets each.

Sean Williams contributed with a gutsy 43 while cameos from wicketkeeper-batsman Peter Moor (24) and Sikandar Raza (25 not out) helped Zimbabwe cross the 300-run mark.

The action now shifts to the fourth ODI on Saturday at the same venue.

Comments
Topics mentioned in this article
Sri Lanka Cricket Team Zimbabwe Cricket Team Niroshan Dickwella Cricket
Get the latest updates on IPL 2021, IPL Points Table , IPL Schedule 2021 , live score . Like us on Facebook or follow us on Twitter for more sports updates. You can also download the NDTV Cricket app for Android or iOS.