Solomon Mire smashed 112 off 96 balls as Zimbabwe scored a historic six-wicket win over Sri Lanka in their opening one-day international in Galle on Friday. 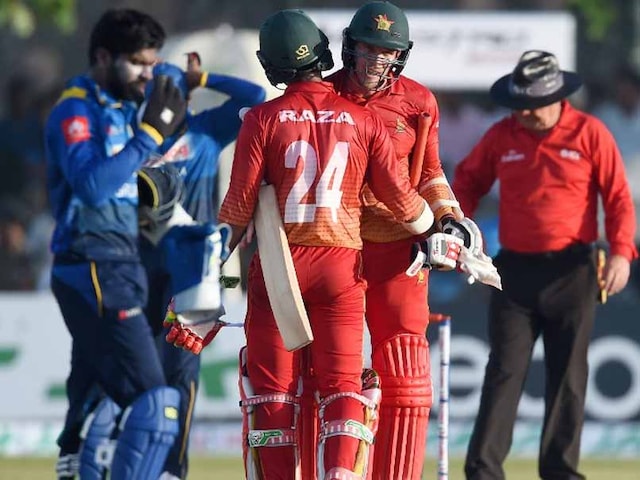 Solomon Mire smashed his maiden one-day century on Friday to take Zimbabwe to a historic six-wicket win over Sri Lanka and pile pressure on the beleaguered Asian nation. Mire hit 112 off 96 balls as Zimbabwe reached 322-4 to pass Sri Lanka's 316-5 with more than two overs to spare. It was the first time in more than 200 one-day internationals in Sri Lanka that a visiting team has scored more than a 300 run target to get a victory.

Sri Lanka have been criticised in recent days by the country's sports minister for being overweight and unfit. Captain Angelo Mathews also laid into his players after the defeat.

"Having 315 on the board, I thought it was enough," he said. "Our bowling was poor and our fielding was pathetic. It was a good batting effort by them."

Mire, known for his quickfire hitting, was twice dropped as Sri Lanka virtually gave the game away.

Sikandar Raza hit an unbeaten 67 and Sean Williams 65 as Zimbabwe stunned the home side in the first one-day international to be held in Galle for 17 years.

The day did not start badly for the home side. Kusal Mendis blasted 86 off 80 balls as Sri Lanka plundered runs off the Zimbabwe attack on a slow pitch.

Upul Tharanga hit 79 and Danushka Gunathilaka 60 after Mathews won the toss and chose to bat.

From there, Zimbabwe, one of the minnows of world cricket, went off script.

Mire, who also bowled seven overs before coming out as an opening batsman, hit 14 fours and his third-wicket stand of 161 with Williams put the African side well on the way to victory.

Raza claimed the winning runs with a six to compound the humiliation.

Raza praised Zimbabwe's selectors for keeping faith with the squad.

"A lot of cricket behind us has helped us pull off this fantastic win," he said.

"I kept telling myself that this had to be for Solomon. For someone to play in this kind of heat after bowling his heart out, that was sensational. I wanted to do it for him."

Cremer called Mire "a real asset to the team, not just with the bat but also with the ball. He's lovely to watch."

Zimbabwe still have four one-day internationals and a Test to face in Sri Lanka, who have faced increasing jibes over recent performances.

"We just want to take it one game at a time," said Cremer. "We can hopefully carry this confidence forward."