The conditions at the Basin Reserve in Wellington could challenge the Indian batting as the series gets underway on Friday. 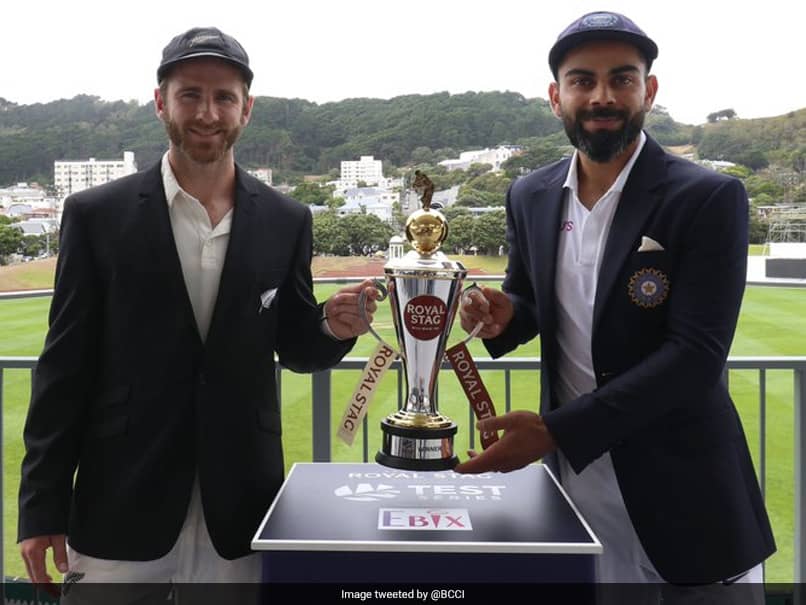 Virat Kohli and Kane Williamson with the trophy ahead of the two-match Test series.© Twitter

India will face their toughest challenge since the start of the World Test Championship when they take on New Zealand in Wellington for the first Test of the two-match series. India will look to maintain their perfect record in the World Test Championship but will have to battle a formidable New Zealand pace attack in windy conditions at the Basin Reserve. While New Zealand were handed a boost in the form of a fit-again Trent Boult, they may be without the services of veteran bowler Neil Wagner, who is expecting the birth of his child. India have a full-strength squad to choose from apart from opener Rohit Sharma, who is nursing a calf injury.

Youngster Prithvi Shaw is likely to make his return to Test cricket opposite fellow opener Mayank Agarwal in Rohit's absence.

Shaw, who last played a Test match in October 2018, made his ODI debut against New Zealand in the just-concluded series between the two teams, and he is expected to partner Agarwal at the top of India's batting order.

Shaw faced competition from Shubman Gill, who impressed with a double-century and a century against New Zealand A, but captain Virat Kohli hinted ahead of the match that it will be Shaw who will get the nod.

With Ishant Sharma also fit to play, having recovered from an ankle injury, India are likely to go in with a bowling attack comprising him, Jasprit Bumrah and Mohammed Shami, with Ravichandran Ashwin as the spinner.

Hanuma Vihari, who scored a century in the warm-up game, is set to start as the sixth batsman.

While Tim Southee and Trent Boult are sure to start for New Zealand, there are doubts over Neil Wagner's involvement in the first match. Wagner is expecting the birth of his child and may leave the team to join his family.

Matt Henry was called up as cover for Wagner, with the uncapped Kyle Jamieson also in the squad.

In the spin department, New Zealand called up Ajaz Patel ahead of leg-spinner Todd Astle.

The match is scheduled to start at 4 am IST.

Virat Kohli Neil Wagner Cricket
Get the latest updates on India vs Australia Series, check out the India vs Australia Schedule for 2020-21 and Ind vs Aus live score . Like us on Facebook or follow us on Twitter for more sports updates. You can also download the NDTV Cricket app for Android or iOS.