We have been working hard on discipline area and the boys have also realised discipline can make the difference, said Sjoerd Marijne. 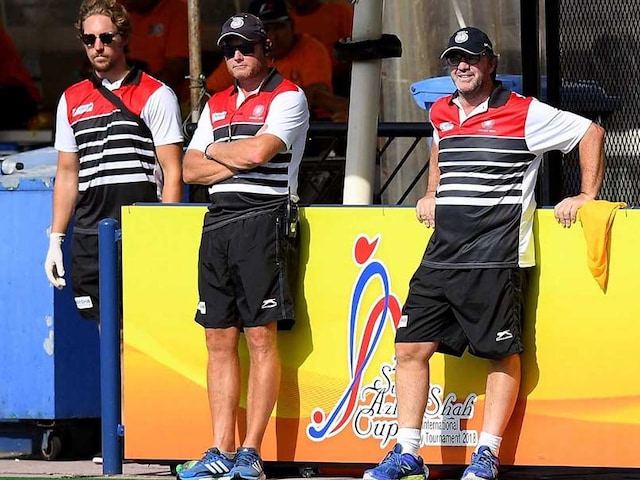 Sjoerd Marijne is handing out punishments to erring players training for the Commonwealth Games, the Indian men's hockey team chief coach trying out the unique experiment to inculcate in his wards discipline, which he says is key to achieving success. The Dutchman, who replaced the legendary Roelant Oltmans at the helm, is taking his players to task whenever they are found to be lacking in discipline. The punishments range from doing push-ups to crawling from one side of the goal to the other and, according to the coach, the players have readily accepted his method.

"I am really happy with our preparation. 2018 is a big year for us and the Commonwealth Games is the first big major tournament and we want to do well in it," Marijne told PTI in an exclusive interview.

"But to do well in big tournaments and against top sides like Australia, we need to be disciplined. We have been working hard on discipline area and the boys have also realised discipline can make the difference.

"The players who are found to be less disciplined and less energetic on the pitch are given punishments like push-ups and crawling from one side to the other. Of course, the punishments are not from a negative point of view," he said.

Marijne said such tasks would make a player realise that hockey is a team game and one individual mistake can ruin its chances.

"If a player is not doing his task properly and with dedication, it can affect the whole team. So, here comes discipline," he said.

With the Asian Games, Champions Trophy and the year-ending World Cup at home, India have a busy calendar year lined-up and the coach said the Commonwealth Games would set the tone for the important tournaments ahead.

"It is a challenging and exciting year for us. The Asian Games is very important for us as we can qualify for the Olympics from there. Then you have the Champions Trophy and later in the year you have the World Cup at home," Marijne said.

"But it doesn't mean we will give our 80 percent in the Commonwealth Games. We try to give our 100 percent in every tournament and the Gold Coast event is very important for us. It's about taking small steps which will eventually lead to bigger goals."

World champions Australia have been a thorn in the flesh for India in the last two Commonwealth Games, having outplayed them in the finals in 2010 and 2014 editions, but Marijne said there is no reason why his side can't get the better of the Kookaburras in Gold Coast.

"Goals are always difficult to set but being the second highest ranked team we will definitely go for the highest position," he said.

"I can't say anything about past but we have closer and closer to Australia so why can't we win (against Australia). It's all about belief.

"But for me, the most important match right now is our first game against Pakistan."

Consistency is something which has been hurting Indian hockey for long, and Marijne said: "Consistency is also about discipline. If you are disciplined on the pitch, consistency will come automatically."

India left out their most experienced player and former captain Sardar Singh from the CWG squad and the coach said he has selected the best possible team for the Games.

Marijne further said that irrespective of their performances, the CWG-bound players will continue to be part of the 24 crore probable group, which will be revised after the Games, in a way hinting that it would be tough for Sardar to make a comeback.

"We saw 50 players in five months and played them in two tournaments each and this group has convinced us the most. The 24 players core group will be reworked after the CWG but these 18 players will be there," he said.

Comments
Topics mentioned in this article
India Hockey Commonwealth Games 2018
Get the latest Cricket news, check out the India cricket schedule, Cricket live score . Like us on Facebook or follow us on Twitter for more sports updates. You can also download the NDTV Cricket app for Android or iOS.