Sanjita Chanu claimed the 53kg category gold on Friday after breaking the Games record in snatch -- her total was 192kg (84kg+108). 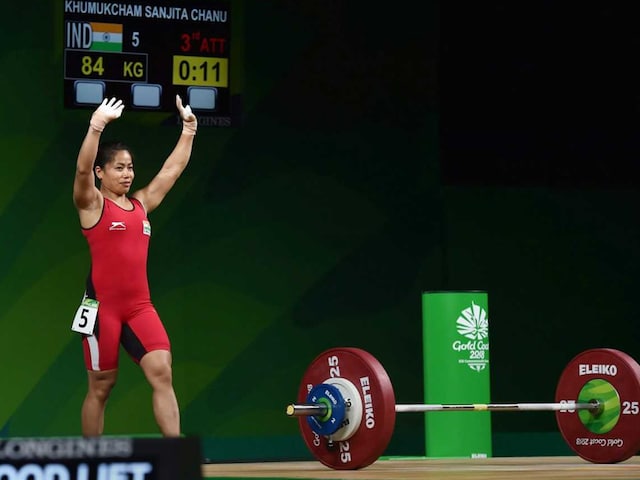 Ever heard of a successive gold-medallist speak of being sad after medal ceremony? That was Indian weightlifter Sanjita Chanu, who was disappointed about not breaking a Commonwealth Games record despite the fact that she was not even 100 per cent fit. The 24-year-old Manipuri claimed the 53kg category gold on Friday after breaking the Games record in snatch -- her total was 192kg (84kg+108). But the ambitious athlete in her was a shade "sad" that she could not break the record in clean and jerk.

"Had I not dropped my last lift, I would have created a Games record. I really wanted to do it. I missed it and I am a bit sad about that. But I guess it's ok, I don't know," said the reigning Commonwealth Championships gold-medallist.

The Indian was attempting a lift of 113kg in her final chance in clean and jerk but could not pull it off.

"I had come thinking of breaking the record and lift 112kg (the CWG record stands at 111kg), I thought it was not that difficult. Probably god was not with me today.

"I became a little stiff during my clean lift and I probably didn't push too well in jerk," she reasoned.

The gold in 53kg came after a top finish in the 48kg category during the Glasgow Commonwealth Games.

The effort is laudable given that Sanjita has been battling a back problem ever since the World Championships last year, where she injured herself just five days before the competition.

"Because of this injury I still cannot train too hard. I have been lucky to get good support which has kept me motivated," said the lifter.

"My back injury was a concern before coming here too, I have barely trained for 15 days for this competition. I am still 10 per cent lacking in fitness. The physio has been working on me outside the competition arena," she said.

The disheartening aspect of the situation is that Indian weightlifters do not have access to their physio in the competition area owing to lack of accreditations. Sanjita, however, chose to play down the situation.

"They (the physios) have helped as best as they can. We have managed somehow," she said.

The 24-year-old broke down during the medal ceremony.

"It was months of pressure finally coming down. I am glad I could prove those wrong who were saying that I had no chance of a medal just because I came second in the Nationals," she said.

Comments
Topics mentioned in this article
Weightlifting CWG 2018 India
Get the latest updates on IPL 2020, check out the IPL Schedule for 2020 and Indian Premier League (IPL) Cricket live score . Like us on Facebook or follow us on Twitter for more sports updates. You can also download the NDTV Cricket app for Android or iOS.