India defeated Malaysia 2-1 in a Pool B match of the men's hockey tournament at the 21st Commonwealth Games (CWG) on Tuesday. 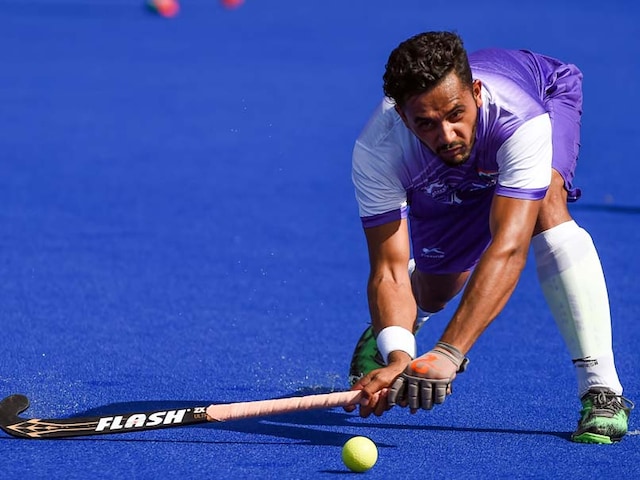 India qualified for the semi-finals of the men's hockey tournament after defeating Malaysia 2-1 in a Pool B match at the Commonwealth Games (CWG) on Tuesday. Harmanpreet Singh (3rd, 44th minutes) converted a couple of penalty corner while the experienced Faizal Saari (16th) reduced the deficit for Malaysia immediately after the start of the second quarter. With this win, India now top the pool table with seven points from three matches. They will play their last pool match against second placed England on Wednesday. With the top two teams advancing to the last four stage, both India and England will go through irrespective of the result of that match.

India had squandered a 2-0 lead to be held to a last gasp 2-2 draw by arch-rivals Pakistan in their opening match. The former Olympic champions then defeated Wales 4-3 in a high scoring encounter.

India were off to an excellent start as Harmanpreet powered home the first penalty corner of the match to give his team an early lead.

Buoyed by the lead, the Indians dominated possession and kept the Malaysian defenders on their toes with a constant stream of attacks.

Forced to defend in numbers Malaysia focussed on keeping out the Indian attacks and hitting back with the occasional counter-attack.

Malaysia found the equaliser immediately after the start of the second quarter as a fast move down the right saw Faisal beat the Indian defence with an excellent run before receiving a defence splitting pass which found him in a one to one situation with India goalkeeper P.R. Sreejesh.

Faisal did well to control the ball before beating Sreejesh with a superb finish from a tight angle.

Although the Indians continued to dominate ball possession, they found it tough to penetrate the well-organised Malaysian defence.

The Indians also did poorly with the penalty corners as they squandered seven of the nine set pieces they earned over the course of the match.

Harmanpreet found the decisive goal in the closing stages of the third quarter when he converted a penalty corner with an excellent placing into the top left corner that beat the Malaysian custodian with its power and precision.

The fourth period saw the Indian continue to dominate their opponents although the Malaysians attacked desperately in the final few minutes to ensure a tense finish.

Comments
Topics mentioned in this article
India Hockey CWG 2018 India
Get the latest Cricket news, check out the India cricket schedule, Cricket live score . Like us on Facebook or follow us on Twitter for more sports updates. You can also download the NDTV Cricket app for Android or iOS.