The Indian women's team staged a late comeback to stun England in a Pool A match hockey match. 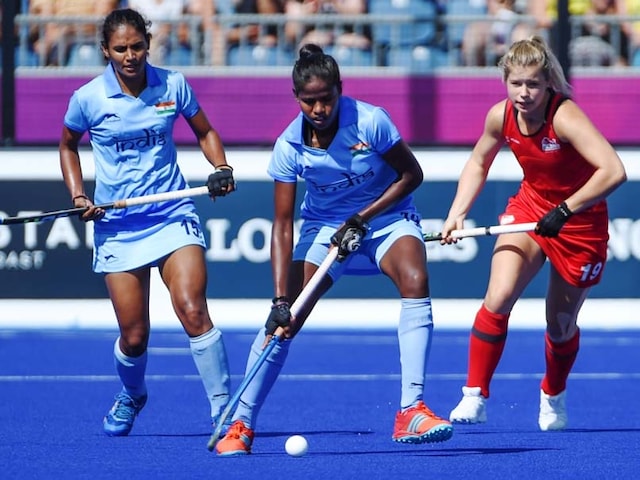 India staged a late comeback to stun England 2-1 in a Pool A match of the women's hockey competition on Sunday. England skipper Alexandra Danson (1st minute) scored in the opening minute to put her team ahead right at the start. India hit back through Navneet Kaur (42nd minute) and Gurjit Kaur (48th minute) in the second half to claim a hard-fought win. England were clearly the superior team throughout the game, hogging most of the ball possession and putting the Indian defence under constant pressure with a a stream of seemingly endless attacks. Despite the pressure, the Indian defenders did well to keep the English forwards at bay with excellent organisation and some tight marking.

The Indians tried to hit back with the occasional counter-attack, but struggled to maintain possession inside their opponents' half.

Despite their dominance, England's failure to penetrate the stubborn Indian defence proved to be costly.

India reduced the margin late in the third quarter when Rani created an excellent move before picking out Navneet at the top of the English penalty circle.

Navneet produced an excellent finish, firing between the legs of England goalkeeper Madeleine Hinch to sound the boards.

Rani was instrumental in India's second goal as well as she earned a penalty stroke early in the fourth quarter after being brought down inside the English penalty area.

Gurjit stepped forward to place the ball into the bottom right corner and hand India the lead.

Desperate to salvage the match England laid siege to the Indian goal, earning their sixth penalty corner in the process.

England manager Maggie Souyave decided on an ultra attacking approach in the final minutes, taking off Hinch for an extra forward.

But the English efforts did not prove to be enough as the Indians bravely held on for the win.

Comments
Topics mentioned in this article
India Women Hockey CWG 2018 India
Get the latest Cricket news, check out the India cricket schedule, Cricket live score . Like us on Facebook or follow us on Twitter for more sports updates. You can also download the NDTV Cricket app for Android or iOS.