Bajrang Punia was unstoppable in the 65kg category as he won all his bouts at CWG 2018 by technical superiority. 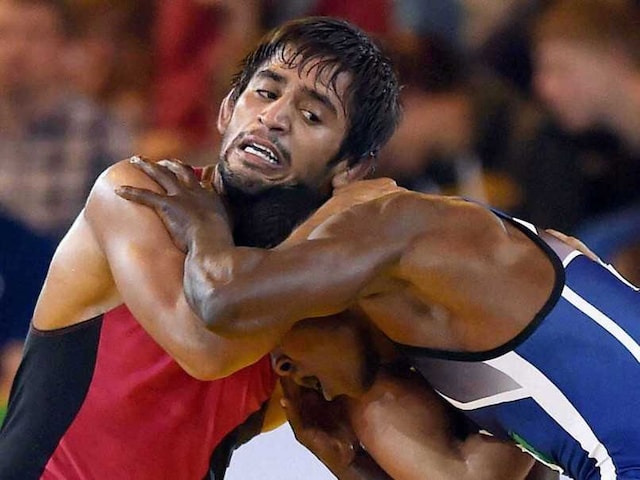 Wrestler Bajrang Punia added another gold medal to the India tally at the 2018 Commonwealth Games at Gold Coast, Australia, when he overcame Kane Charig of Wales by Technical Superiority in the men's 65kg category on Friday. Bajrang was head and shoulder above his Welsh opponent and a 10-0 point margin, achieved in the second round, decided the gold for India with minimum fuss. This was India's 17th gold at CWG 2018. Bajrang came up with an awe-inspiring performance to win all his bouts by technical superiority throughout the contest. Bouts are awarded on the basis of technical superiority when a wrestler takes a lead of 10 or more points.

Bajrang had overpowered Vincent de Marinis of Canada in the semi-finals.

He had started his campaign with a power-packed display against Brahm Richards of New Zealand.

In the quarter-finals, Bajrang outclassed Amas Daniel of Nigeria, building up a 10-0 lead early in the second round.

The domination continued in the semi-finals Bajrang pulled off a series of two-point moves to take an 8-0 lead in the first round.

India's hopes of a gold in the men's 97 kg category were squashed when Mausam Khatri went down to Martin Erasmus of South Africa in the final.

Meanwhile, India's efforts in the women's section fell short of the golden mark. Divya Kakran had to settle for bronze in the 68 kg category.

Divya lost to Blessing Oborududu of Nigeria in the semi-finals and then got the better of Sherin Sultana of Bangladesh in the bronze medal match.

Pooja Dhanda too fell short against her Nigerian opponent Odunayo Adekuoroye in the 57 kg category and will return home with a silver.

Comments
Topics mentioned in this article
Wrestling CWG 2018 India
Get the latest Cricket news, check out the India cricket schedule, Cricket live score . Like us on Facebook or follow us on Twitter for more sports updates. You can also download the NDTV Cricket app for Android or iOS.