Commonwealth Games 2018, Day 1, Highlights: Weightlifters S. Mirabai Chanu and Gururaja sparkled to deliver a gold and a silver, respectively, for India on the opening day of the 21st edition of the Commonwealth Games. 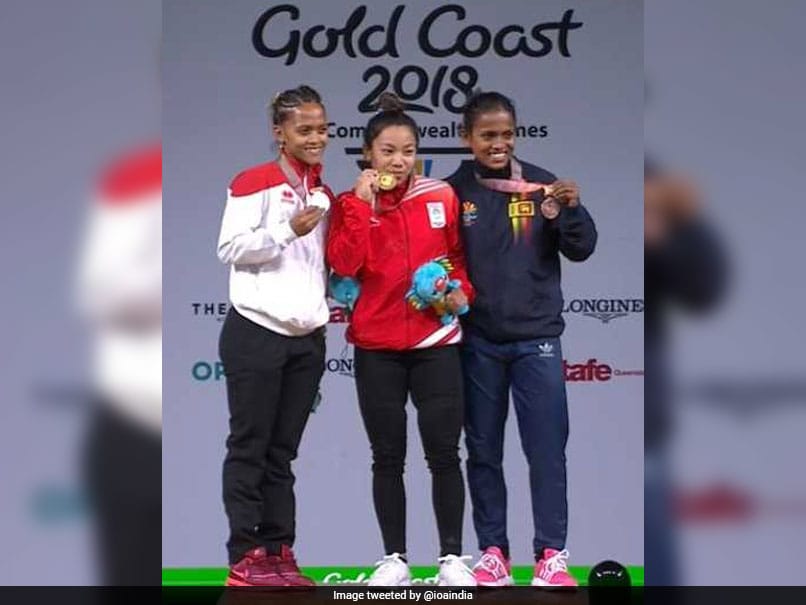 Weightlifters S. Mirabai Chanu and Gururaja sparkled to deliver a gold and a silver, respectively, for India on the opening day of the 21st edition of the Commonwealth Games. Mirabai, the reigning world champion, delivered a power-packed performance in the women's 48-kg category, leaving the competition far behind by setting Games and Commonwealth records in the snatch, clean and jerk as well as the total. The Manipuri powerhouse registered 86 kg in the snatch and 110 kg in clean and jerk for a total of 196 kg. Such was her dominance that she net a record in each of her six lifts in the competition. In the men's 56-kg category, Gururaja had a best attempt of 111 kg in the snatch and 138 kg in the clean and jerk for a total of 249 kg to bag the silver medal. The performances of Mirabai and Gururaja meant that weightlifting as a discipline continues to be a main medal-provider at the CWG. The third weightlifter in action, Muthupandi Raja, finished sixth in the men's 52-kg competition, lifting a total of 266 kg. The 18-year-old's best effort in the snatch event was 116 kg and in the clean and jerk, he lifted 150 kg. (Medals tally)

17:45 IST: BASKETBALL: India lose 87-96 to Cameroon in men's preliminary round Pool B match

Women's #TeamIndia lost to #TeamJamaica earlier!#CheerUp boys & girls, as @KingJames says 'Don't be afraid of Failure, This is the way to Succeed! @BFI_basketball pic.twitter.com/9qKKBX1eyf

15:05 IST: SQUASH: With their respective victories, Dipika and Chinappa have entered the pre-quarterfinals of women's singles event.

14:52 IST: In SQUASH, Dipika Pallikal beats Trinidad and Tobago's Charlotte Knaggs 3-0 in women's singles round of 32.

14:30 IST: In SWIMMING, Virdhawal Khade and Srihari Nataraj have qualified to compete in Semifinal 2.

13:58 IST: BASKETBALL: India vs Jamaica, women's preliminary round Pool B match is underway. 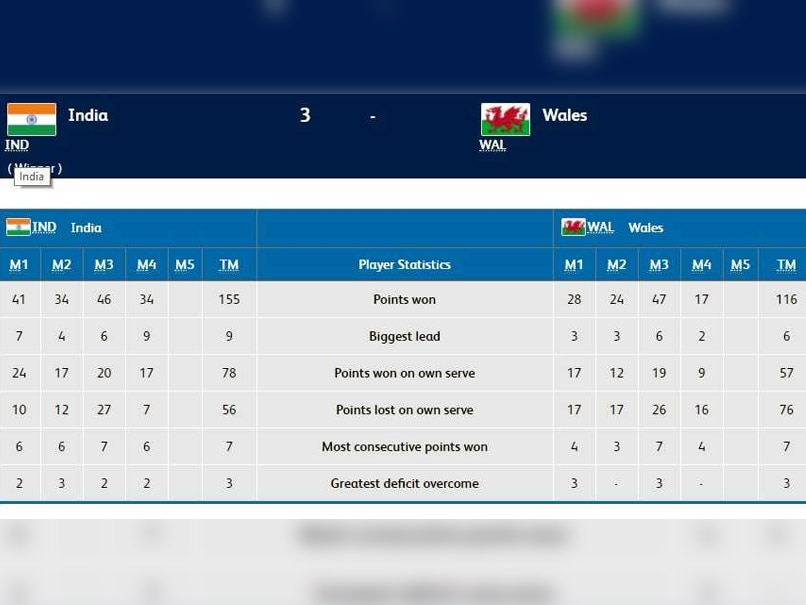 The medals where an athlete is "Expected" to win are generally the toughest internally for the athlete. Many congratulations to #MirabaiChanu on a spectacular performance at @GC2018 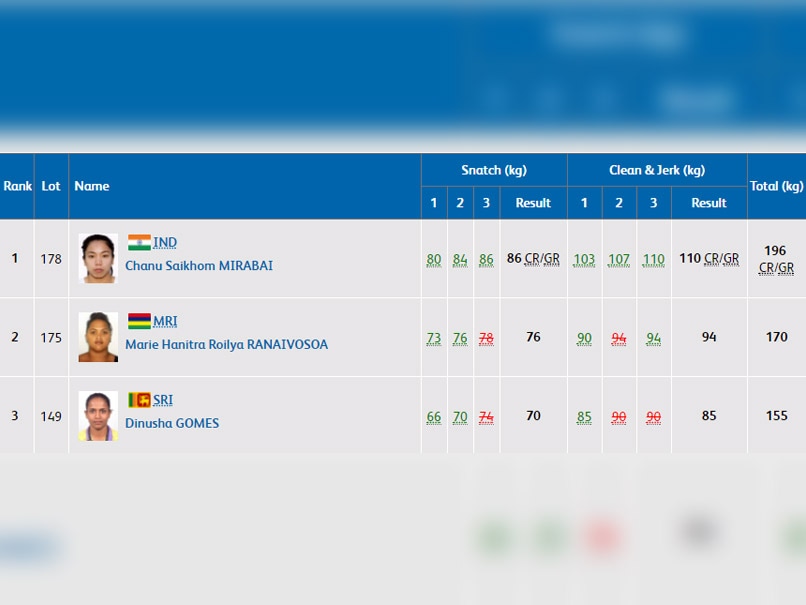 11:34 IST: And India win its first GOLD! Mirabai Chanu, who wins a gold, sets Commonwealth Record and Commonwealth Games Record with a total lift of 196 kgs.

11:20 IST: Mirabai Chanu in action. The only thing that stands between her and the gold medal is Mauritius' Marie Hanitra Roilya, who lifted a total of 170 kgs.

11:00 IST: In the women's 48 kg category, with a total lift of 150 kg and one lift remaining, Papua New Guinea's Thelma Toua is currently topping the contest.

10:45 IST: After conquering Sri Lanka in round one, India is ready for round 2.

10:30 IST: TERRIFIC, TERRIFIC start from Mirabai Chanu. She sets a new Commonwealth record and a commonwealth games record with an 86 kg lift in snatch in the 48kg women's category. India inch closer to its first gold.

10:10 IST: Sandhu beat Stafford in the round of 64, advances to the next round. Great start for India in squash.

09:50 IST: Sandhu leads Stafford 2-1 in the men;s singles round of 64. The fourth game is under way, can he win and advance to the next round.

09:15 IST: Australia's Sally Pearson pulled out of the Commonwealth Games after failing to recover from an Achilles problem. Pearson, the 100 metres hurdles world champion, said she was "disappointed" but added that she needed to give herself the best chance of competing at the Tokyo 2020 Olympics.

IN FOCUS | "Gutted, absolutely gutted. There was a lot of tears flowing. I guess you could call it grief," #GC2018 Ambassador @sallypearson on her decision.
Read: https://t.co/RNDA6xwF4z pic.twitter.com/N3QLsPUudU

09:00 IST: India's Virdhawal Khade advanced to the semi-finals in the men's 50 metre butterfly event. Khade, who competed in Heat 5 along with teammate Sajan Prakash, overcame a slow start in lane 6 to finish fifth, clocking 24.52 seconds.

08:45 IST: In Table Tennis, India continue their fine run as they beat Trinidad and Tobago 3-0 in the men's team event.

08:30 IST: In Gymnastics, the Indian team comprising of Ashish Kumar, Rakesh Patra and Yogeshwar Singh are in action.

08:15 IST: India have been really impressive in the mixed team event in badminton as they trounce Sri Lanka 5-0.

IN FOCUS | First gold medal goes to @floraduffy in the #GC2018Triathlon. It was a strong performance from the World No.1! Read: https://t.co/JPR7TuRXcp pic.twitter.com/5t5OJVSPyz

08:05 IST: India are currently cruising in badminton against Sri Lanka.

We have our first medal. Many congratulations to GURURAJA for coming second and winning #Medal at the @GC2018 lifting total weight of 249kg in the Men's 56kg event! Super proud of you Gururaja !#GC2018Weightlifting pic.twitter.com/gde39VMfoZ

07:10 IST: A mixed start for India on the opening day of the CWG. While India beat Sri Lanka 3-0 in the mixed team event in badminton, the Indian women's hockey team lost the opening game 2-3 to Wales.

While Chanu's medal prospects make her the top draw for the Indian contingent, also in action will be the shuttlers, boxers, the women's hockey team and the table tennis players among others. The hockey team had finished fifth the last time around and will be beginning its campaign against Wales on Thursday morning. The Indians had done well in the tour of South Korea coming into the Games, winning the series in a morale-boosting effort.

The most star-studded Indian line-up in the Games, the badminton squad, has a busy schedule on the first competition day. The team will be in action in the mixed event and has clashes lined up against Sri Lanka and Pakistan. While the Sri Lanka match is scheduled for the morning, the face-off against the rivals from across the border is due in the second half of the day. The likes of PV Sindhu, K Srikanth are not expected to be stretched much in these matches.

Then there are the boxers. Only one of them -- the 2010 CWG gold-medallist Manoj Kumar (69kg) -- will be taking the ring. The veteran would be up against Nigeria's Osita Umeh in his opening clash and will be aiming to ensure that the focus firmly shifts from the needle controversy that marred the squad's build-up.

On the squash court, Dipika Pallikal, Joshna Chinnappa, Sourav Ghosal and Harinder Pal Sandhu will kick off their singles campaigns. Pallikal and Chinnappa had claimed the women's doubles gold in the 2014 Games and it remains to be seen whether a singles medal becomes a reality this time around.

While the women's team will square off against Vanuatu and Fiji, the men's team comprising the likes of veteran A Sharath Kamal and G Sathiyan will be facing Trinidad and Tobago and Northen Ireland.

Away from the spotlight and having dealt with their fair share of selection controversies prior to the Games, the Indian men's team of artistic gymnasts will be presenting their challenge on the opening day of competition. The spotlight here will be on comeback-man Ashish Kumar, who had scripted history by becoming the first Indian gymnast to claim CWG medals. He had claimed a bronze in floor exercise and a silver in vault. Plagued by injuries ever since Ashish would be aiming to reclaim the lost time with a strong showing.

Also, there would be the cyclists even though medal expectations from them are not too high. Nonetheless, a certain Deborah Herold's name continues to evoke some curiosity despite the former Asian medallist's lack of any recent achievements.

The men's and women's basketball teams will also be playing their respective opening matches tomorrow, against Cameroon and Jamaica.

Comments
Topics mentioned in this article
CWG 2018 Other Sports All Sports Live Blogs
Get the latest updates on India vs Australia Series, check out the India vs Australia Schedule for 2020-21 and Ind vs Aus live score . Like us on Facebook or follow us on Twitter for more sports updates. You can also download the NDTV Cricket app for Android or iOS.