The packed house at Feroz Shah Kotla on Sunday (October 6) evening was treated to some serious hitting. In the end, however, the all-star Mumbai batting line-up had more firepower than their Rajasthan counterparts and sealed a 33-run win. 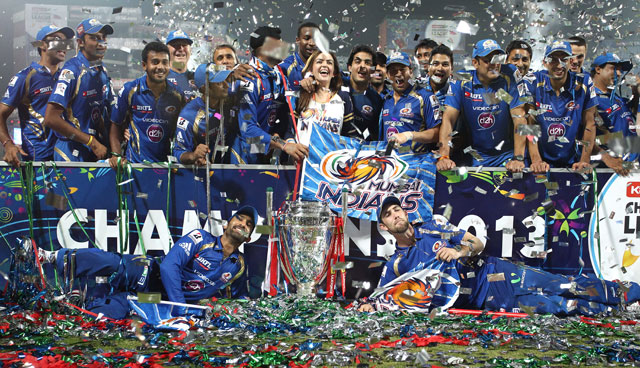 The packed house at Feroz Shah Kotla on Sunday (October 6) evening was treated to some serious hitting in the final of the Champions League Twenty20 2013, with the two teams - Mumbai Indians and Rajasthan Royals - scoring 371 runs between them. In the end, however, the all-star Mumbai batting line-up had more firepower than their Rajasthan counterparts and sealed a 33-run win. The Rajasthan chase fell apart after staying on course for 16 of their 20 overs. Mumbai, and their captain Rohit Sharma, now have the double for 2013 in their kitty, after adding the CLT20 title to their IPL VI trophy. (Scorecard | Match Highlights)

Having opted to field on winning the toss, Rajasthan did everything right for the first half of the Mumbai innings, but then ended up conceding 142 runs in the second half as Mumbai finished with 202 for 6. The Rajasthan chase, despite super contributions from Sanju Samson and Ajinkya Rahane, lost its way after promising much, and folded up for 169 in 18.5 overs. (Match pics)

In between, Tendulkar turned it on in collaboration with Dwayne Smith. Smith smashed the third ball of the first over, bowled by James Faulkner, for a big six over midwicket but Watson kept things tight and had a good lbw shout against Tendulkar turned down. Tendulkar looked like he was getting into his stride, hitting the first and second deliveries of the fifth over for fours, the second one a delectable cover drive, before being dismissed for 15. (Also read: Emotional Dravid thanks players, supporters for warm farewell)

Though Ambati Rayudu and Smith played their shots, the run rate did dip after the Power Play overs. From 46 for 1 after six, Mumbai only reached 60 without further loss after ten overs and much of the credit for that went to Pravin Tambe, who bowled yet another splendid spell.

Tambe, with his mix of legspinners and slow swingers, then pushed Mumbai back further with a double-strike, both Smith (44 in 39 balls) and Rayudu (29 in 24 balls) out bowled going for big slogs off flat deliveries. Tambe completed his four overs with figures of 2 for 19.

But there's a reason Mumbai are regarded as highly as they are and overs 11 to 20 passed in a haze of sixes and fours as each of the remaining Mumbai batsmen turned on the style. The Rajasthan medium pacers lost their line, length and composure. Rohit Sharma's 33 runs came in just 14 balls, Kieron Pollard's 15 in ten, while Glenn Maxwell smashed two sixes and four fours in a 14-ball 37. Dinesh Karthik and Harbhajan Singh added a further 22 runs in seven balls, three of those going for sixes.

In all, Mumbai hit 20 fours and nine sixes in their innings.

Set a big target, Rajasthan started in right earnest. Dravid dropped himself down the order to accommodate Kusal Perera, drafted in after Brad Hodge went out with a knee injury, at the top and Perera scored two boundaries in the first over, bowled by Maxwell, before running himself out, attempting a run Rahane was never interested in.

In walked Samson, and for the next 11 overs, there was some fantastic hitting from Samson and Rahane, the fours and sixes coming in just the right frequency and the runs coming at close to ten an over. The two of them were lucky at times, as quite a few shots fell short of fieldsmen, but that was to be expected with the batsmen going for broke.

Samson was the more aggressive of the two, and his 60 runs came from just 33 balls, as Rahane looked more intent on shepherding the chase to the end. Samson showed scant regard for the reputation of the bowlers he faced, hitting each of Harbhajan Singh, Nathan Coulter-Nile, Pragyan Ojha and Rishi Dhawan for sixes. He also looked utterly comfortable for the most part till, it seemed, the pressure started to tell. He survived a dropped catch off Coulter-Nile when on 55, and then sliced Ojha straight to Harbhajan at short third man after adding five more runs.

Rajasthan were well ahead of Mumbai on the comparative score chart at that stage, having reached 117 for 2 after 12 overs, but the asking rate was inching upwards. Shane Watson perished for the cause and when Rahane was finally dismissed, caught at the midwicket boundary off a Harbhajan full toss after scoring 65 in 47 balls, and Stuart Binny and Kevon Cooper followed him to the dugout, the die was cast for Rajasthan.

Dravid finally walked out to bat at No. 8 with 44 still needed in three overs, and Harbhajan having completed his spell with figures of 4 for 32. He lasted just two balls before being bowled by Coulter-Nile and the end came quickly after that, as Pollard picked up the last three wickets in the penultimate over.

Comments
Topics mentioned in this article
Cricket Sachin Ramesh Tendulkar Rahul Dravid Champions League Twenty20 2013 Rajasthan Royals Mumbai Indians
Get the latest updates on ICC T20 Worldcup 2022 and CWG 2022 check out the Schedule, Live Score and Medals Tally. Like us on Facebook or follow us on Twitter for more sports updates. You can also download the NDTV Cricket app for Android or iOS.