Maxim Dadashev had been hospitalized since late Friday night following surgery for massive head trauma from a loss to Subriel Matias in their 140-pound International Boxing Federation world title eliminator. 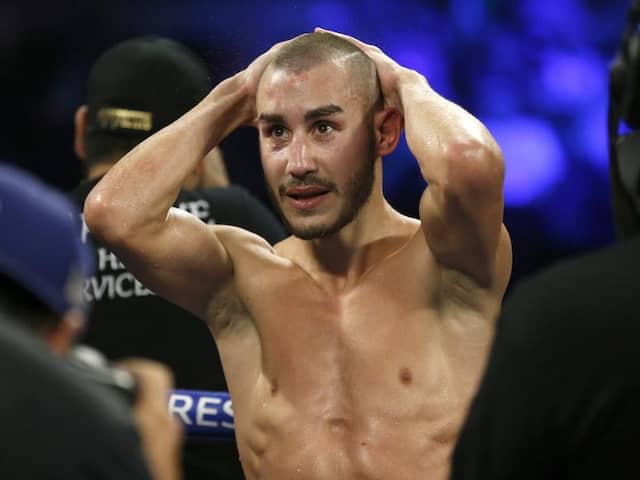 Russian-born boxer Maxim Dadashev has died of injuries suffered during a fight Friday night at a casino resort in Maryland, his wife and officials from Top Rank promotions said Tuesday afternoon. Dadashev, 28, had been hospitalized since late Friday night following surgery for massive head trauma from a loss to Subriel Matias in their 140-pound International Boxing Federation world title eliminator. Dadashev's wife, Elizaveta Apushkina, traveled from Russia over the weekend to be with her husband, according to manager Egis Klimas, who was at the hospital after the fight, along with strength and conditioning coach Donatus Janusevicius. The couple has a 2-year-old son, Daniel.

"It is with great sadness that I confirm the passing of my husband, Maxim Dadashev," Apushkina said in a statement released by hospital officials. "He was a very kind person who fought until the very end. Our son will continue to be raised to be a great man like his father.

"Lastly, I would like to thank everyone that cared for Maxim during his final days. I ask that everyone please respect our privacy during this very difficult time."

Officials at Top Rank, which promoted Friday's card, indicated the Maryland State Athletic Commission, which did not immediately return a request for comment, would almost certainly launch an investigation into the circumstances surrounding Dadashev's death.

The Russian newspaper Sport-Express reported the Boxing Federation of Russia would also conduct an investigation and would provide financial assistance to Dadashev's family. Top Rank also indicated it would offer financial support to Dadshev's family.

"Maxim was a terrific young man," Top Rank chairman Bob Arum said in a statement. "We are all saddened and affected by his untimely death."

The Russian news agency Tass first reported Dadashev's death due to heart failure, citing a source in the fighter's camp.

Dadashev began showing symptoms of head trauma while trying to walk back to his dressing room following the bout at the Theater at MGM National Harbor outside Washington. His trainer, Buddy McGirt, had stopped the fight minutes earlier following the 11th round during which Dadashev absorbed multiple violent blows to the head.

Dadashev collapsed outside the ring, and emergency medical technicians immediately attended to him, eventually lifting him onto a stretcher. Dadashev then began vomiting and was transported by ambulance to the hospital to undergo emergency surgery.

During a two-hour procedure early Saturday at Prince George's Hospital Center, Dadashev had the top right portion of his skull removed to relieve swelling from a subdural hematoma.

Matias had been administering heavy punishment during the 10th and 11th rounds, landing repeatedly to the body with combinations. Dadashev labored to counter with much of anything over the latter part of the fight, instead covering up with Matias aggressively coming forward.

After the bell sounded at the conclusion of the 11th, Dadashev sat down on a stool in his corner surrounded by McGirt, Janusevicius and others on his training team.

Referee Kenny Chevalier approached Dadashev's corner to check on the status of the fighter for the next round, at which point McGirt informed Chevalier he was going to stop the bout. Chevalier then waved his hands signaling an official stoppage.

McGirt, a decorated welterweight, told reporters after the fight that Dadashev wanted to continue.

Dadashev weighed in at 139.2 pounds for his first fight in the Washington metropolitan area since turning professional in 2016. He had won all 13 of his bouts, as had Matias, entering Friday's co-main event in front of an announced crowd of 2,100.

The fight was the first of Dadashev's career to go beyond 10 rounds. He twice before had gone the distance in 10-round bouts. Three of his last five fights went five rounds or fewer.

"Did he overtrain? No," Klimas said. "He was under good control. Donatus was taking care of our conditioning. You saw he was in good condition."

(The Washington Post's Isabelle Khurshudyan contributed to this report.)

(This story has not been edited by NDTV staff and is auto-generated from a syndicated feed.)
Comments
Topics mentioned in this article
Boxing
Get the latest Cricket news, check out the India cricket schedule, Cricket live score . Like us on Facebook or follow us on Twitter for more sports updates. You can also download the NDTV Cricket app for Android or iOS.