"No Victory Is Complete...": Nikhat Zareen's Pic With Mary Kom Is Viral

Nikhat Zareen posed with her World Boxing Championship gold medal with the legendary MC Mary Kom in a picture that has gone viral. 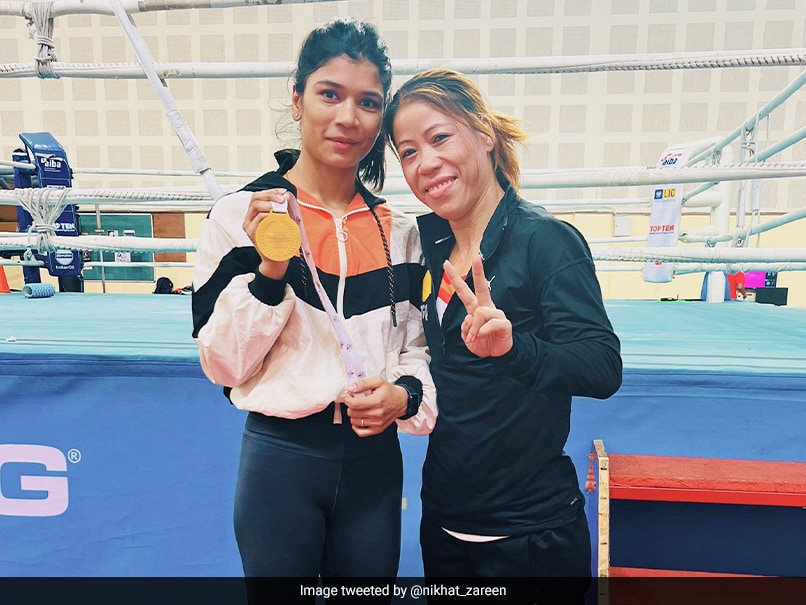 Nikhat Zareen won gold at the Women's World Boxing Championship last week, becoming just the fifth Indian woman to secure gold medal in the tournament's history. The 25-year-old, on Wednesday, took to social media to share a picture with Indian boxing legend Mary Kom, who has six gold medals in the World Championship, and wrote "No victory is complete without your idol's blessings." The two share history, having gotten into a tiff over qualification for the 2020 Tokyo Olympics, and the picture has gone viral, getting over 10,000 'likes' and 500 retweets.

There was a lot of spotlight going into the Mary Kom vs Nikhat Zareen women's boxing trials bout in 2019 after the latter made a public demand for a fair Olympic selection trial. After her win, Mary Kom could be seen marching past her opponent and not shaking her hands.

"Why should I shake hands with her? If she want others to respect her then she should first respect others. I don't like people with such nature. Just prove your point inside the ring, not outside," Mary Kom was quoted as saying by ANI at the time.

However, the two seem to have buried the hatchet.

The six-time World Champion had congratulated Nikhat Zareen after her huge victory.

"Congratulations @nikhat_zareen for winning Gold medal. So proud of you on your historic performances and all the best for your future endeavors," she had tweeted.

In the photo shared by Nikhat Zareen, the legendary boxer is seen with a beaming smile.

Speaking to NDTV, Nikhat Zareen recently said that she has moved on from the incident with Mary Kom and has forgiven her.

In the final of the 52kg event at the World Boxing Championship in Turkey, Zareen beat Thailand's Jitpong Jutamas with a 5-0 unanimous decision in her favour.

Mary Kom Boxing Social
Get the latest updates on Fifa Worldcup 2022 and check out  Fifa World Cup Schedule, Stats and Live Cricket Score. Like us on Facebook or follow us on Twitter for more sports updates. You can also download the NDTV Cricket app for Android or iOS.