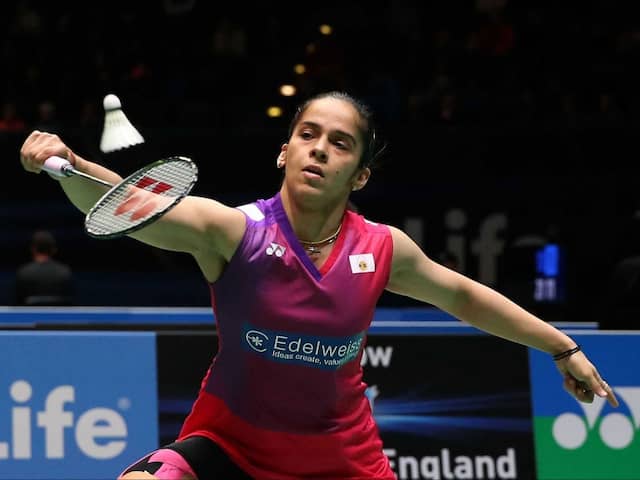 Carolina Marin dominated the quarter-finals from the onset to thrash Saina Nehwal 21-6, 21-11 in 31 minutes at the BWF Badminton World Championships 2018 and book a spot in the women's singles semi-final. The superior seeded Spaniard looked in fine form as she gave no chance to the 10th seeded Indian to impose her game. In the opening game, Marin accumulated quick points to quickly race to the mid-game interval with a massive 11-2. Saina, on the other hand, looked out of touch and failed to get better of her counterpart. The Indian also made repeated unforced errors in the process which helped Marin, close the game at 21-6 in 12 minutes without breaking much sweat. In the second game, Saina opened the scoring but fell behind Marin, who mixed her shots well to keep the Indian -- who looked out of touch, under continuous pressure. The Spaniard played all-out attack, mixing up her smashes and touches well in-time to keep lead 11-8 at the mid-game interval. From there on, it was no looking back for the seventh seeded, who gave a few points to her Indian counter-part but eased through to close the game 21-11 in 19 minutes

11:17 IST: Saina Nehwal knocked out! The tenth seeded Indian lost 6-21, 11-21 to the superior seeded Carolina Marin in 31 minutes. The Spaniard booked herself a spot in the semi-final. What a performance!

11:15 IST: Looks like there is no way back for Saina Nehwal here. Carolina Marin continues her dominance, inches closer on a semi-final berth at World Championships with 19-10 lead.

11:14 IST: Unforced errors from Saina Nehwal, only helping Carolina Marin grow better in the game. She has been on song from the onset. Marin leads 16-9.

11:11 IST: Carolina Marin holds three-point advantage at mid-game interval. She leads 11-8 to Saina Nehwal -- who has looked a bit more challenging in the second game.

11:08 IST: Better from Saina Nehwal, plays a wide shot, Marin made a diving effort but failed to pick up the shot. Nehwal has closed the gap to 5-9 now.

11:06 IST: Marin tries to play with soft hand, but fails to get a touch of the shuttle. Nehwal trails 3-7

11:05 IST: In the second game, after Nehwal took with first point, Carolina Marin has come from behind to make it 6-2. She's looking to play the match of her career today!

10:59 IST: Game point to Carolina Marin! The seventh seeded smashes one to close the first game 21-6 in mere 12 minutes played. The tenth seed Indian will have to change gears in the second game.

10:58 IST: Nehwal stretches to reach the shuttle but puts it wide, seventh seeded Marin has stretched her lead comfortably to 19-6.

10:56 IST: Saina Nehwal 4-15 Carolina Marin. The Spaniard has taken an upper hand from the onset, she continues to dominate the game.

10:51 IST: LONG RALLY! But left-handed Carolina Marin takes the point after Nehwal's long shot ends up dropping outside the line.

10:49 IST: Carolina Marin screams as usual, after she takes three consecutive points, before the lower seeded Nehwal pulls one back.

10:45 IST: Saina Nehwal and Carolina Marin have taken the centre court. It will be 10th encounter when these two have come head-to-head.

10:16 IST: In the mixed doubles, Indian unseeded pair of Satwiksairaj Rankireddy and Ashwini Ponnappa are trailing to top seeded Zheng Siwei and Huang Yagiong from China 15-17 in the first game.

10:15 IST: Hello and welcome to the live commentary from the quarter-final match between Saina Nehwal and Carolina Marin.

Saina took her time to settle down and Intanon gave her a tough time in the early stages of the opening game. Intanon was leading 8-5 at one point, but Saina took six consecutive points to take the lead.

The Indian continued to dominate after the break to take the first game by a comfortable margin.

The second game was a tighter affair with both players fighting neck and neck till the very end. But with the scores tied at 19-19, Saina took two back to back points to clinch the issue.

Comments
Topics mentioned in this article
Live Blogs Saina Nehwal Carolina Marin Badminton
Get the latest Cricket news, check out the India cricket schedule, Cricket live score . Like us on Facebook or follow us on Twitter for more sports updates. You can also download the NDTV Cricket app for Android or iOS.