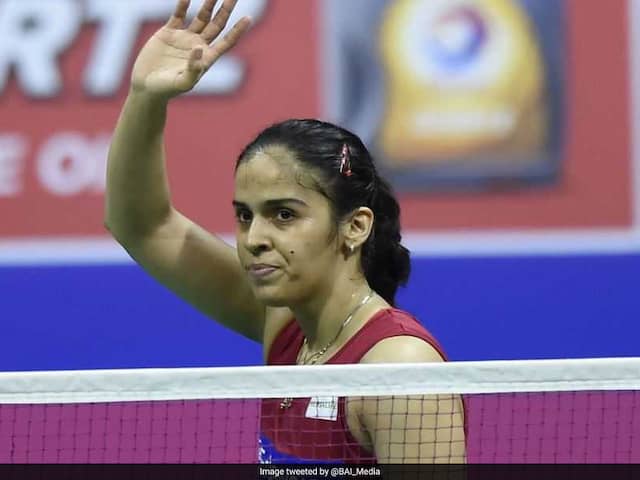 Saina Nehwal and Kidambi Srikanth defeated their respective counter-parts to proceed further in the Badminton World Championships on Tuesday. Nehwal defeated Aliye Demirbag 21-17, 21-8 in straight games to enter the third round where she will face Indonesian Ratchanok Intanon. On the other hand, Srikanth outclassed unseeded Nhat Nguyen in straight games to enter the second round. Srikanth defeated the Irish 21-15, 21-16 in 37 minutes in the men's singles match of the Badminton World Championship at Nanjing in China.

Srikanth looked the better of the two shuttlers from the onset, but the Irish showed some resilience to take a slender lead in the first game before Srikanth came from behind to close it with ease. Where as, the second game started neck-and-neck and remained the same before Srikanth converted his mid-game interval lead to go on and clinch the match.

12:37 IST: Saina Nehwal defeats Aliye Demirbag 21-17, 21-8 in the women's singles match to enter third round. She will face Ratchanok Intanon in the third round.

12:34 IST: Two consecutive smashes from Saina, Demirbag failed to second one up. The Indian leads the unseeded Turkish 17-7.

12:32 IST: Quick release from Demirbag, to play the shot wide, which falls just inside the line. She will take a point for that to trail 6-13 after losing the opening game.

12:29 IST: First rally of the match, excellent play from both the shuttlers on display. Saina gets the better of her opponent to keep lead at the mid-game interval 11-4.

12:28 IST: Saina tries to play a soft-hand, gives away a point in the process as the shuttle hits the net. The tenth seeded still hangs on to a 9-4 lead.

12:21 IST: Saina Nehwal takes the first game 21,17 in 18 minutes. Only on one occasion Demirbag looked the stronger of the two shuttlers, but she failed to capitalise on her slender advantage.

12:13 IST: Three quick unforced errors from Demirbag, Saina pulls on a breathing space by taking a 14-10 lead. Can she hold on to it?

12:10 IST: Great attack from Demirbag, she smashes one, out of the reach for Nehwal, leads 10-9 before Saina comes from behind to take a 11-10 lead at the mid-game interval.

12:10 IST: Demirbag takes lead for the first time 6-5, Nehwal has just started to look a bit out of touch. The lead is now stretched to 9-7.

12:04 IST: Nehwal is making Demirbag strive for points, the star Indian shuttler is combining her shots well. Nehwal leads by a slender 5-3 margin in the opening game.

11:58 IST: Saina Nehwal and Aliye Demirbag have take the centre court, a bit of warm-up session going on before the second round match gets underway.

Coming from behind, @P9Ashwini /@satwiksairaj put up a gutsy show to pull off the next 2 games and the match. The mixed doubles duo is through to Rd 3 of #WorldChampionship2018 with a win over German pair 10-21;21-17;21-18.
Way to go guys! #IndiaontheRise pic.twitter.com/2XxF7wbA44

11:25 IST: 10th seeded Saina Nehwal's opponent, Aliye Demirbag is unseeded in the World Championship. The Turkish ranks 76th and she will take on the star Indian shuttler for the first time in her career. Stay tuned with us for all the action from the centre court.

11:20 IST: Some good result coming up for the Indian fans! Ashwini Ponnappa and Satwiksairaj Rankireddy win their mixed doubles first round match 10-21, 21-17, 21-18 against fifteenth-seed German's Mark Lamsfuss and Isabel Herttrich.

10:36 IST: Kidambi Srikanth, the world no. 6, will face Pablo Abian from Spain tomorrow.

India opens Day 2 account with a win #WorldChampionship2018@srikidambi beat Nhat Nguyen representing Ireland 21-15;21-16 to reach the second round of @BWFWorldChamps. The world no 6 will face Pablo Abian from Spain in his Rd 3 encounter tomorrow. #IndiaontheRise #Nanjing2018 pic.twitter.com/p1Ze98E5nZ

10:20 IST: Tenth seed Saina Nehwal will take on unseeded Aliye Demirbag from Turkey in the women's singles tie, later in the day! Expect around 40-odd minutes for the premier India shuttler to take on the court.

10:00 IST: Another set-back for India! In the men's doubles, the pair of Arjun M.R. and Ramachandran Shlok suffered defeat in straight games against Malaysian One Yew Sin and Teo Ee Yi 14-21, 15-21 in 29 minutes.

08:58 IST: The second game has begun neck-in-neck, Kidambi Srikanth tries to take the lead with his patience and composure at the mid-game interval.

08:47 IST: Kidambi Srikanth clinches the last six points in a row to win the opening game 21-15. It was always his game to win, only for once Nguyen looked the better shuttler but failed to capitalise.

08:43 IST: What a comeback! Back to back points, Nguyen returns to take a slender 15-14 lead. First time in the game that the Irish has looked strong. He will want to make it count, what has Kidambi got up his sleeve here?

08:36 IST: Srikanth leads 11-5 in the opening game over Nguyen. A fierce start from the fifth seeded Indian.

08:23 IST: Kidambi makes a strong start, takes the initial points to lead in the opening game. Nguyen, on the other hand is making unforced errors.

08:10 IST: Kidambi Srikanth is world no. 6 while Nhat Nguyen ranks 87. Both the shuttlers will clash against each other for the very first time.

08:00 IST: Hello and welcome the live commentary of the men's singles match between Kidambi Srikanth and Nhat Nguyen.

The first day of the World Championships saw HS Prannoy record a straight-game win against New Zealand's Abhinav Manota on Monday. Prannoy, seeded 11th in the tournament, hardly broke a sweat as he cruised past the unseeded New Zealander 21-12, 21-11 in just 28 minutes. He will next take on Brazilian Ygor Coelho in the second round. The men's doubles pair of Manu Attri and B Sumeeth Reddy , the mixed doubles pairs of Pranaav Jerry Chopra and N.Sikki Reddy and Satwiksairaj Rankireddy and Ashwini Ponappa also advanced to the second round.

Comments
Topics mentioned in this article
Kidambi Srikanth Saina Nehwal Live Blogs Badminton
Get the latest Cricket news, check out the India cricket schedule, Cricket live score . Like us on Facebook or follow us on Twitter for more sports updates. You can also download the NDTV Cricket app for Android or iOS.