Australia vs India: Rishabh Pant Pleads With Ajinkya Rahane To Go For DRS, Rohit Sharma Laughs It Off. Watch

Rohit Sharma had a nice chuckle as Rishabh Pant failed to convince Ajinkya Rahane to go for DRS against Tim Paine on Day 1 of the fourth Test in Brisbane. 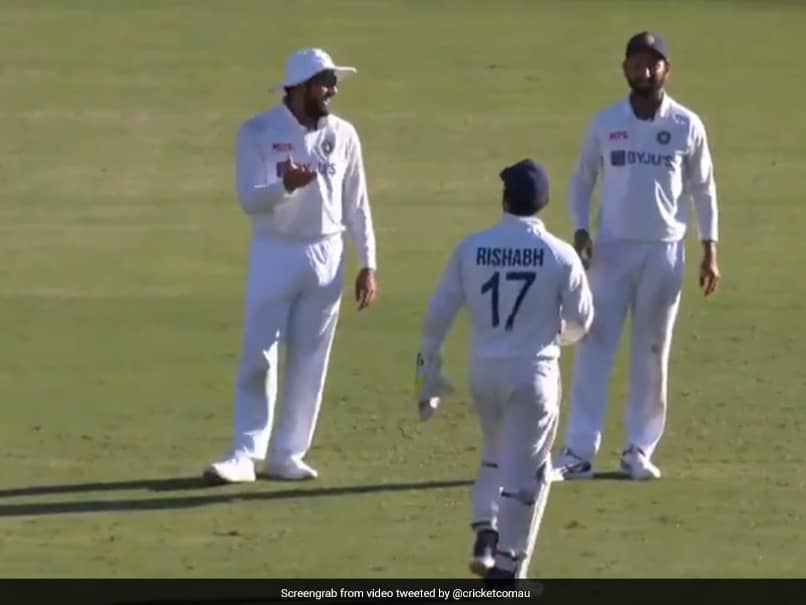 Rohit Sharma had a laugh as Rishabh Pant failed to convince Ajinkya Rahane to go for a review.© Twitter

Rishabh Pant, the wicketkeeper, seemed to be in a chirpy mood on Day 1 of the ongoing fourth Test between Australia and India on Friday. He was quite vocal behind the stumps, egging the bowlers on at every given opportunity. However, the wicketkeeper also provided some comical relief to his teammates, especially to those standing in the slip cordon. In the final session of the day, Pant did his best, pleading with skipper Ajinkya Rahane to take a review. There were no takers despite Pant's insistence, but it did manage to bring a smile, especially on vice-captain Rohit Sharma's face. Rohit just couldn't resist having a laugh at Pant's antics behind the stumps. T Natarajan, on debut, had beaten the outside edge of Tim Paine's bat in the 84th over and Pant was the only one who went up for a shout for a possible caught behind against the Australian skipper.

Cricket Australia took to Twitter to share the video of the light moment that left the Indian slip cordon in splits.

Rishabh Pant was heaps keen on this one but he was getting donuts from the cordon! #AUSvIND pic.twitter.com/p4kHh536IZ

"Rishabh Pant was heaps keen on this one but he was getting donuts from the cordon," the tweet read.

Earlier in the day, Tim Paine won the toss and opted to bat at the Gabba.

Injury-ridden India fielded four fresh faces in the final Test of the four-match series, handing out debuts to Natarajan and Washington Sundar.

Mohammed Siraj struck in the very first over as David Warner edged one to Rohit Sharma in slips.

Shardul Thakur then removed Marcus Harris before Steve Smith and Marnus Labuschagne steadied the ship for the hosts.

Sundar got his maiden Test wicket in the form of Steve Smith who chipped one off his pads straight to Rohit Sharma at short mid-wicket.

Natarajan picked up two wickets before the close of play as Australia took control of the proceedings at Stumps on Day 1.

Australia Cricket Team Australia vs India 2020-21 Cricket
Get the latest updates on India vs England Series, India vs England , live score and IPL 2021 Auction . Like us on Facebook or follow us on Twitter for more sports updates. You can also download the NDTV Cricket app for Android or iOS.