Australia vs India: Marnus Labuschagne was not out on 47 while Steve Smith was unbeaten on 29 as Australia finished Day 3 at 103/2, leading India by 197 runs. 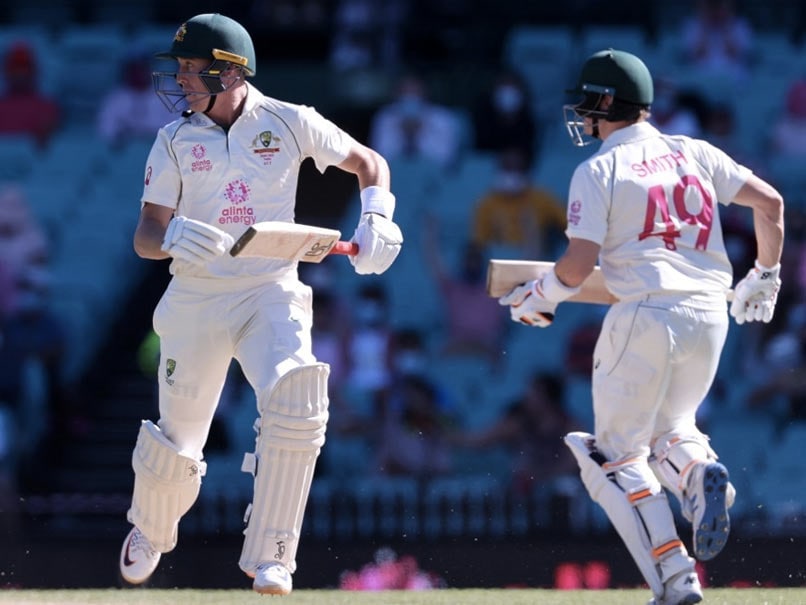 First innings heroes Marnus Labuschagne and Steve Smith steered Australia to an commanding 197-run lead in the high-stakes third Test in Sydney Saturday, leaving an injury-hit India with a mountain to climb. They came to the crease after Will Pucovski and David Warner fell early, pushing them to 103 for two at stumps and a strong position with the four-Test series locked at 1-1. Labuschagne, who scored 91 in the first innings, was not out 47 and Smith, who blitzed 131 in his first knock, unbeaten on 29.

Australia padded up again after taking eight wickets on day three to dismiss India for 244 in reply to the hosts' 338.

It gave them a handy 94-run lead, with India's task made harder by the absence of key spinner Ravindra Jadeja, who was sent for scans after a hit to the thumb while batting.

Wicketkeeper Rishabh Pant joined him in the clinic after a nasty blow to the elbow.

Despite this Mohammed Siraj stepped up to remove Pucovski for 10, caught by substitute keeper Wriddhiman Saha, with the debutant unable to replicate the 62 he made the first innings.

Ravi Ashwin then took the prized scalp of David Warner for 13, his ninth career dismissal of the opener, trapping him lbw.

But the disciplined Labuschagneand Smith steadied the ship, building a 68-run partnership that is slowly taking the game away from India.

India were all out just before tea after some scintillating bowling and razor-sharp fielding, having resumed on a fine day at the Sydney Cricket Ground at 96 for two.

Pat Cummins took 4-29, including the stoic Cheteshwar Pujara for 50 while Josh Hazlewood removed a dangerous Pant after a breezy 36.

The pair's downfall saw the team crumble, with Ashwin and Jasprit Bumrah both run out, joining Hanuma Vihari who suffered the same fate earlier in the day.

A cautious Pujara began the day on nine and captain Ajinkya Rahane two after Hazlewood and Cummins dismissed openers Rohit Sharma (26) and Shubman Gill (50) on Friday.

Rahane, who scored a century in the last Test at Melbourne, had an escape on 16, with a Nathan Lyon delivery ballooning to Matthew Wade at short leg, who could only get his fingertips on the ball.

The skipper then whacked Lyon for six before his new-found aggression cost him his wicket, chopping a Cummins ball onto his stumps in the next over.

Pujara did what he does best at the other end, grinding out singles while occasionally opening his bat, bringing up his 26th half-century.

But the celebrations were short-lived, with Pant out two balls later, edging a Hazlewood delivery to Warner at slip.

And it got worse when Pujara was removed in the next over, gloving a rising Cummins ball to wicketkeeper Tim Paine.

India slumped, with Ashwin slow off the mark for a single and Cummins alert, making a quick throw to Labuschagne standing at the stumps.

It followed Vihari being brilliantly run out for four before lunch, attempting a run that wasn't there, with Hazlewood diving to his right and throwing the ball onto the stumps in one movement.

Bumrah became the third run out of the day, courtesy of a lightning-fast Labuschagne before Jadeja added 28 runs for the last wicket with Siraj.

Sydney Cricket Ground (SCG), Sydney Australia vs India 2020-21 Cricket Australia vs India, 3rd Test
Get the latest updates on IPL Auction 2023 and check out  IPL 2023 and Live Cricket Score. Like us on Facebook or follow us on Twitter for more sports updates. You can also download the NDTV Cricket app for Android or iOS.