"Win For The Ages": How Team India Reacted After Historic Series Win In Australia

Brisbane Test: India posted an improbable three-wicket win over Australia and the Team India players were all over social media celebrating the success. 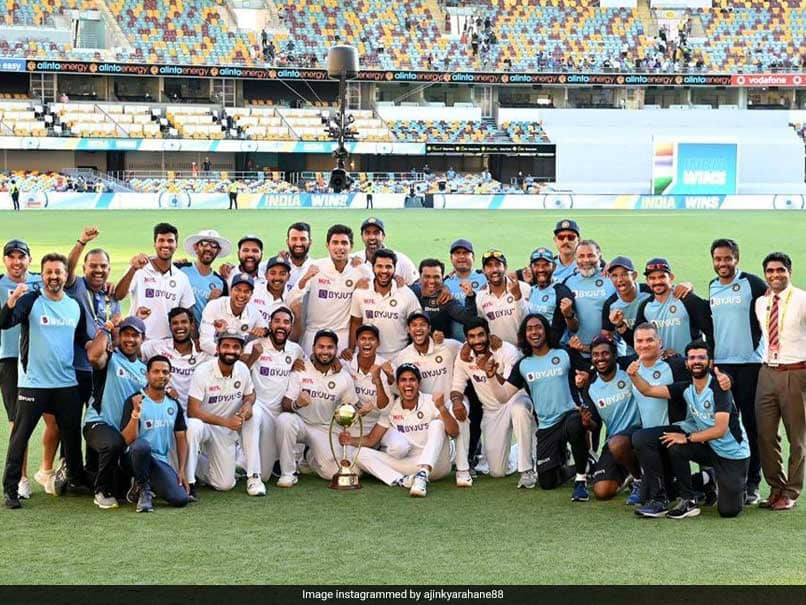 AUS vs IND: India won a second consecutive Test series against Australia Down Under.© Twitter

India completed back-to-back Test series wins against Australia at their home on Tuesday, with a historic victory at the Gabba in Brisbane. Stellar performances from a depleted side saw the visitors chase down the 328-run target with three wickets to spare, as Australia were defeated at their fortress for the first time since 1988. India won the Border-Gavaskar trophy for the third time in succession, a run that started with the home series win in 2017. The India players who all played their part in the epic series win took to social media to celebrate the special achievement.

"Proud to be a part of this unit," wrote Ajinkya Rahane, who led the team in the last three Tests in the absence of regular captain Virat Kohli.

"This is a win we're never forgetting, this is a win for the ages! So proud of this team, Jai Hind," tweeted fast bowler Jasprit Bumrah, who concluded by writing "CHAMPIONS".

"HISTORY CREATED," tweeted Washington Sundar, who made an impressive debut in the fourth Test in Brisbane, scoring 62 in the first innings and picking up four wickets in the match.

"Undoubtedly, one of the best series I've been a part of. Everyone stood up to the challenge when it mattered the most; a sign of a champion team. LOVE THIS TEAM!" tweeted Mayank Agarwal.

"Proud and privileged to be a part of this side!" wrote Hanuma Vihari, who played a crucial innings to help India save the third Test in Sydney.

Proud to be a part of this unit pic.twitter.com/bZZupXEAfE

This is a win we're never forgetting, this is a win for the ages! So proud of this team, Jai Hind CHAMPIONS pic.twitter.com/9KzLG28QaJ

When the chips are down. You push harder. A series we can never forget. Through the tough times we always believed and backed ourselves and this series win proves with belief you can achieve everything.@BCCI pic.twitter.com/uPPhzmFHAT

Proud and privileged to be a part of this side! #jaihind pic.twitter.com/tB770Vd9ze

A performance we will remember forever. Congratulations #TeamIndia A brilliant series, terrific brand of cricket on display. You were fantastic. pic.twitter.com/UdnFtf5TmN

The Board of Control for Cricket in India has announced a Rs 5 crore bonus for the team in recognition for their performance in the series. The come-from-behind victory has also seen India rise to No.2 in the ICC Test rankings.

Umesh Yadav Australia vs India, 4th Test Cricket
Get the latest updates on India vs England Series, India vs England , live score and IPL 2021 Auction . Like us on Facebook or follow us on Twitter for more sports updates. You can also download the NDTV Cricket app for Android or iOS.