Virat Kohli smashed a century and MS Dhoni scored a fifty as India defeated Australia by six wickets to level the ODI series 1-1. 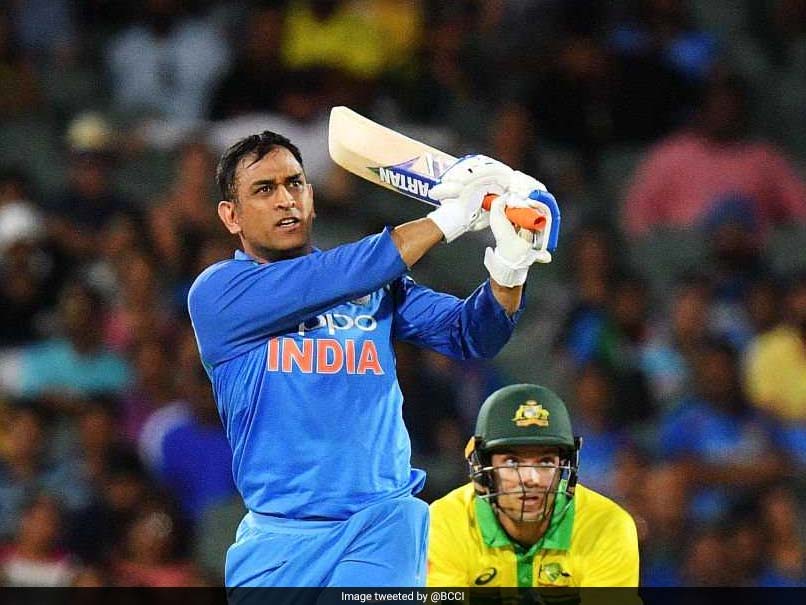 MS Dhoni scored an unbeaten 55 off 54 balls in Adelaide.© Twitter

Even though Virat Kohli's century laid the foundations India's victory, MS Dhoni played equally important and propelled India to a six-wicket win in the second One-Day International (ODI) against Australia at the Adelaide Oval on Tuesday. Winning the last-over thriller, helped India level the three-match series 1-1 as Australia had won the opening match in Sydney on Saturday. Heaping praise on India's World Cup-winning captain MS Dhoni, Virat Kohli said it was an "MS classic" in Adelaide, adding that the 37-year-old remains an integral part of the ODI team ahead of the ICC World Cup 2019.

"There is no doubt that he should be a part of this team. Tonight was MS classic. He calculates the game so well. He takes the game till the end, when only he knows what's going on in his mind, and he backs himself to hit those big shots at the end," Kohli said at the post-match presentation ceremony.

Kohli could not take his team home this time but Dhoni (55*) and Dinesh Karthik (25*) rose to the occasion with an unbeaten 57-run stand, helping India chase down a target of 299 with four balls to spare.

"You look for little moments to pump you up, get into the zone, and that's what I was trying to do. I tried to stay as aware as possible in recognising the moment to strike.

"I thought those 2-3 overs were the moment, to bring the gap between runs and balls down. When it comes off it looks good. It was a really tough day.

"My pants are white with the sweat, the salts coming out. MS was tired as well, fielding for 50 overs and batting as well, it was tough."

Kohli was also all praise for seamer Bhuvneshwar Kumar for his crucial blows at the death.

"We wanted to try and restrict them in the end. I thought they were going to get away from us when Maxy (Glenn Maxwell) and Shaun (Marsh) were in. Getting them in two balls was brilliant. I thought 298 was par on that wicket, with the start they had.

"Bhuvi was outstanding to pull things back for us. Vijay Shankar is in the squad, he's an all-rounder, so that gives us an option to play around with - but we'll see how we go. But backing five bowlers and seeing it come off is pleasing as a captain."

Australia rode Shaun Marsh's century to post a challenging target after winning the first ODI. But India's batting might proved too good for the home bowlers. Skipper Aaron Finch acknowledged that.

"When you come up like a batting side against India, you know you have to get wickets regularly, and we ran into that man Dhoni as well. Credit to India, they played well.

"What we've been working towards is some real solid performances through the middle overs. I'm responsible for the Powerplays, and I've not been coming off. It's a matter of time, I think.

"It's not easy when you're not getting runs, but captaincy is separate from personal performance, and you have to be consistent with your actions," Finch said.

Virat Kohli Australia vs India 2018/19 Cricket Australia vs India, 2nd ODI
Get the latest updates on ICC T20 Worldcup 2022, check out the Schedule and Live Score. Like us on Facebook or follow us on Twitter for more sports updates. You can also download the NDTV Cricket app for Android or iOS.