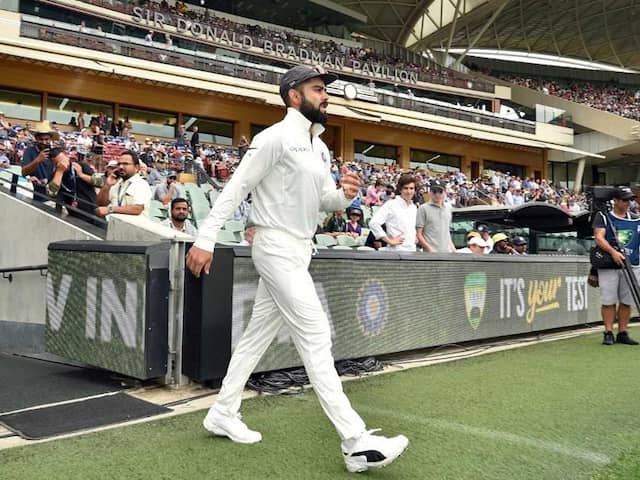 Virat Kohli made headlines for all the wrong reasons in 2012.© AFP

Virat Kohli failed to make a big contribution in the ongoing first Test of the four-match series against Australia. He was dismissed for scores of three and 34 in the two innings of the opening Test at the Adelaide Oval. On a rain-interrupted Day 3 on Saturday, Virat Kohli lost his wicket to Australia spinner Nathan Lyon for the sixth time, most by any bowler in Tests. Before the start of the first Test, the Indian skipper had claimed in an interview with former Australian wicketkeeper Adam Gilchrist that he is a "massively different" cricketer from the last two Australia tours.

"I didn't have a good understanding of where to draw the line and stuff like that. Those are things that I, I wouldn't say I regret, but definitely I look at them as mistakes. But mistakes that were important for me to commit so I can learn from them," icc-cricket.com quoted Kohli as saying in an interview to Fox Sports.

"I learn from my own mistakes, I realise my own mistakes myself, and just kept correcting them through the journey. But (I'm) massively different from the last two tours, especially the first one. I was so bad," he added.

During his first tour to Australia in 2012, Kohli made headlines for all the wrong reasons after he was seen making a rude gesture to the crowd in a Test match in Sydney.

In the second tour to Australia in 2014, Kohli improved his game furthermore. Breaking a series of records, he aggregated 692 runs in the four-match series at an average of 86.50 and scored four centuries.

In the backdrop of all the celebrations, Kohli has engaged in verbal spats with the opponents on many occasions. Kohli's on-field aggression has become a signature and he has backed it up with his incredible batting performances.

The 30-year-old Delhi batman has scored 6,331 Test runs in 73 matches with 24 centuries and 19 fifties. Leading from the front, he helped India climb to the number one spot in the ICC Test team rankings.

Kohli admitted that whatever he did in the past isn't justified but added that this is how he is. "I was never a perfect mould of typical, old school cricketer. I always just wanted to find my own way and I guess those things were a part of that journey," he added.

On Saturday, Kohli joined an elite list of Indian batsmen to score 1,000 Test runs in Australia. India's batting greats Sachin Tendulkar, Rahul Dravid and VVS Laxman were the only ones to reach the milestone.

Adelaide Oval, Adelaide Australia vs India 2018/19 Cricket Adam Gilchrist
Get the latest Cricket news, check out the India cricket schedule, Cricket live score . Like us on Facebook or follow us on Twitter for more sports updates. You can also download the NDTV Cricket app for Android or iOS.