"MS Dhoni Is One Of The Best": Tim Paine Lauds India's Former Captain

MS Dhoni led India to victory at the 2007-08 Commonwealth Bank Series in Australia. 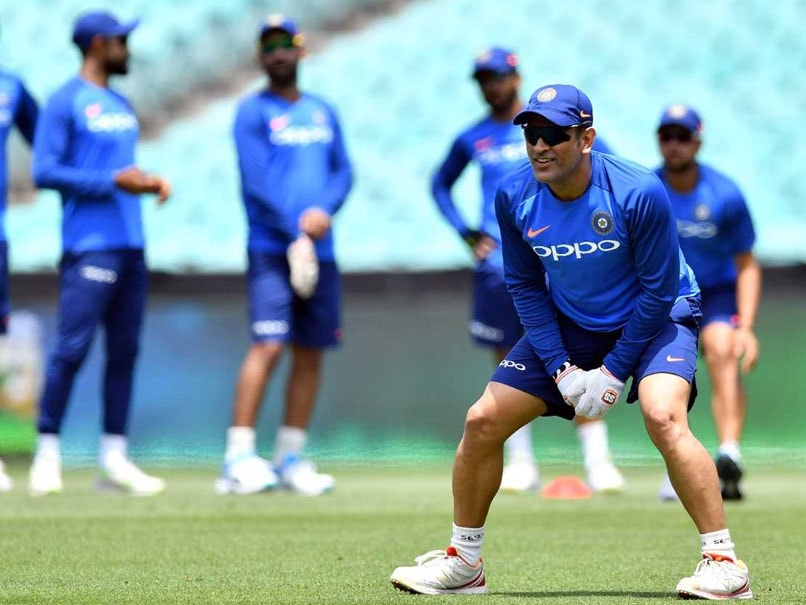 MS Dhoni last played for India in the ODI series against the Windies in November 2018.© AFP

MS Dhoni is set to light up the three-match One Day International series Down Under, starting in Sydney on Saturday, after having missed the three-match T20 International series that India managed to draw 1-1 in November 2018. While young wicket-keeper Rishabh Pant replaced MS Dhoni in T20Is, the latter made a return to the squad for the ODI series as India prepare for the upcoming ICC World Cup. Among many fans waiting to see India's World Cup-winning captain in action, Australia Test captain Tim Paine is no less excited to see him bat in the the highly-anticipated ODI challenge.

Praising the 37-year-old Indian wicket-keeper, Paine told cricket.com.au: "I think he is one of the best wicketkeeper-batsmen to ever play the game. He is right up there, no doubt about that, particularly in white-ball cricket."

"Hopefully he doesn't get too many runs but it's certainly going to be nice to have him here for a little bit. I'm happy I won't be out there against him," he added.

After a draw in T20Is and 1-2 loss in the four-match Test series, Australia will host India for three ODIs, in Sydney, Adelaide and Melbourne.

Paine explained how Dhoni simplifies the complicated game of cricket, adding that he's becoming even more relaxed amid the constant pressure coming from all corners.

"What I do love about watching him play, whether he is batting or keeping and captaining, he keeps things very simple. That's just from what I can see. Cricket is very complicated game and I've enjoyed watching him really simplify it still in this modern age," he said.

"He just looks like he does the basics pretty well, stays real relaxed and - at his age from the pressure he would be under in India and around the world - he looks like he just loves playing cricket," he added.

On Friday, Dhoni delighted his fans in Sydney following a practice session. Former India captain met his fans, gave autographs and posed for pictures at the Sydney Cricket Ground.

"MSD fever at the SCG post practice. Humble as always, @msdhoni signed a few autographs for the fans who had gathered to watch #TeamIndia train before the 1st ODI," the BCCI captioned the video of Dhoni with his fans at SCG.

MSD fever at the SCG post practice. Humble as always, @msdhoni signed a few autographs for the fans who had gathered to watch #TeamIndia train before the 1st ODI #AUSvIND pic.twitter.com/AoBsBf2WyF

MS Dhoni Cricket Australia vs India, 1st ODI
Get the latest updates on India vs South Africa and check out  Schedule, Results and Live Score. Like us on Facebook or follow us on Twitter for more sports updates. You can also download the NDTV Cricket app for Android or iOS.