Bhuvneshwar Kumar is not in the XII announced for the Adelaide Test. 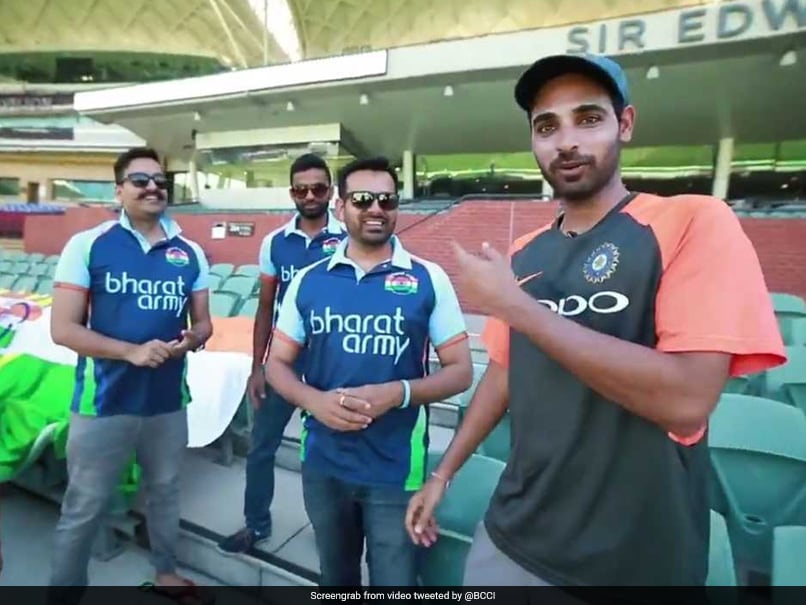 Bhuvneshwar Kumar, India's swing bowling exponent, was happy on Wednesday in spite of not being included in the XII for the Adelaide Test after fan group Bharat Army dedicated a song to him ahead of the match, which will mark the beginning of India's four-Test series in Australia on Thursday. The Bharat Army, who welcomed India at the Adelaide airport on Sunday, got a surprise visit from fast bowler Bhuvneshwar Kumar at the Adelaide Oval. The cricket-frenzy travelling fans group then sang a song to the Indian pacer.

The Board of Control for Cricket in India (BCCI) shared the video of Bhuvneshwar's entertaining session with the Bharat Army on Twitter, saying: "Bhuvi surprises Bharat Army with a kind gesture at the Adelaide Oval. Watch on as the Bharat Army sings a song for Bhuvneshwar Kumar."

SPECIAL: Bhuvi surprises Bharat Army with a kind gesture at the Adelaide Oval

Watch on as the Bharat Army sings a song for @BhuviOfficial pic.twitter.com/9hG3fThrHQ

"Fans make a lot of songs for batsmen, we thought we should make one for bowlers to pump them up ahead of the tough series," one of the Bharat Army members said in the video.

Following a three-match T20 International series, which ended in a 1-1 draw, Australia will host India for the four-Test series. India have never won a Test series down under in 70 years.

This time, the number one-ranked Indian Test team will start favourites in the gruelling series as Australia are just coming out of a bad phase. The hosts are missing the services of their prominent batsmen Steve Smith and David Warner, both of which are serving one-year bans for their involvement in the infamous ball-tampering scandal in South Africa in March 2018.

However, India will not take the opposition lightly as both captain Virat Kohli and his deputy Ajinkya Rahane claimed that the hosts are not "vulnerable" without Smith and Warner.

"I personally don't think any Australian side is vulnerable at home. They still have the skill to dominate at home. We're not taking anything for granted," Kohli said at the pre-match press conference on Wednesday.

"As a side, we're looking to correct the mistakes from the last two tours. The focus is completely on our side," he added.

Vice-captain Rahane on Tuesday said: "I feel that any team that plays at home, they feel really good, and I feel that Australia are still the favourites to win the series. We are not going to take them lightly at all. Yes, they (will) miss Steve Smith and David Warner but I don't think they are vulnerable."

Bhuvneshwar Kumar Australia vs India 2018/19 Cricket
Get the latest updates on SA vs IND 2021-22, check out the Schedule and Live Score . Like us on Facebook or follow us on Twitter for more sports updates. You can also download the NDTV Cricket app for Android or iOS.