Ravindra Jadeja impressed with a sharp throw to send Usman Khawaja back to the pavilion in Adelaide. 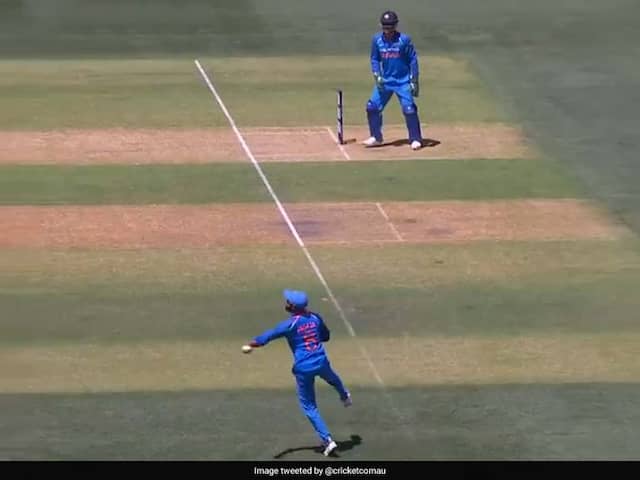 Ravindra Jadeja never fails to enthrall cricket fans with his super ability on the field. During the second One Day International between India and Australia on Tuesday, the Indian all-rounder again displayed a remarkable piece of fielding to dismiss Usman Khawaja and left the netizens in awe of him. Ravindra Jadeja threw the ball sharply to dismantle the stumps and send Khawaja back to the pavilion in the 19th over to keep Australia at bay. Cricket.com.au shared the video of Jadeja's stellar run out on Twitter, saying: "This is a grouse piece of fielding."

A user lauded Jadeja with a reply: "Strongest and most accurate arm going around in world cricket."

Strongest and most accurate arm going around in world cricket

Another one joined in saying: "He loves when someone challenge his Arm Power. So accurate and powerful."

He loves when someone challenge his Arm Power....So a accurate & powerful.

While one of the fans claimed "he can beat time", another one called it a "rocket" of a throw.

Jadeja. the best fielder in Indian team....Only he can beat time and batsmen

Earlier, Australia won the toss and opted to bat in Adelaide. Australia lead the three-match ODI series 1-0 as they beat India by 34 runs in Sydney on Saturday.

"Looks like a good wicket to bat on and I don't think it'll change much throughout. We played a really good game the other day. I think it's a good chance to put some pressure on with a good score," Australia captain Aaron Finch said after winning the toss.

India captain Virat Kohli said he likes to be in such situations where they get to bounce back as a team.

"It looks a great wicket to play on. The conditions are going to be a big factor for us as it's hot and humid. We were a bit scratchy at Sydney, just to get the one-day side together. We like to be in these situations where we get to bounce back as a team," Kohli said at the toss.

Ravindra Jadeja Australia vs India 2018/19 Cricket Australia vs India, 2nd ODI
Get the latest Cricket news, check out the India cricket schedule, Cricket live score . Like us on Facebook or follow us on Twitter for more sports updates. You can also download the NDTV Cricket app for Android or iOS.