Virat Kohli led India out as they began their long tour of Australia with the first T20I in Brisbane. 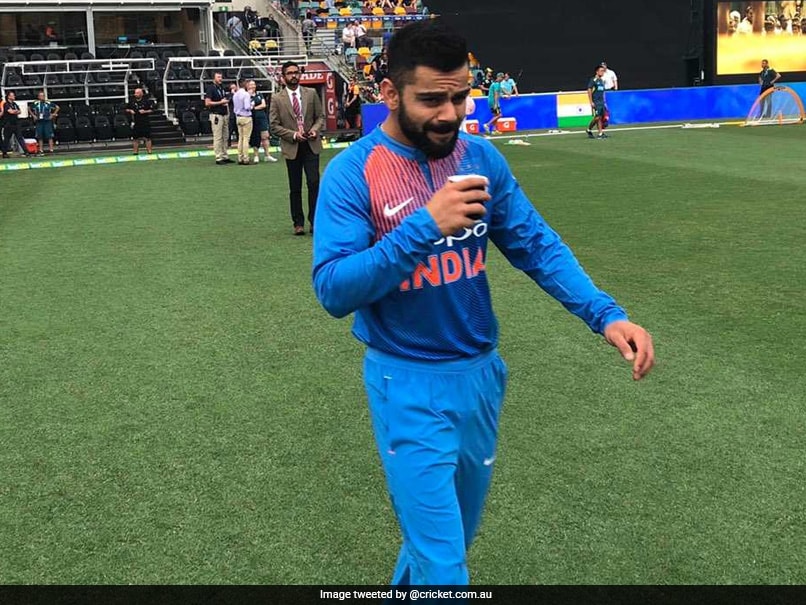 Even before winning the toss, Virat Kohli started receiving loud cheers from the crowd.© Twitter

Virat Kohli, who returned to the action after a brief period of rest, received a warm welcome when he came for the toss during the first T20 International between India and Australia at the Gabba. Virat Kohli was rested for the T20I series against the West Indies at home, which India eventually won 3-0 under the captaincy of Rohit Sharma. India started their gruelling tour, including three T20Is, four Tests and three ODIs, in Brisbane on Wednesday. Captain Virat Kohli won the toss and opted to bowl against an unsettled Australian team.

Even before winning the toss, Kohli started receiving loud cheers from the crowd, mostly Indians who came in huge numbers to support their home team in Australia.

"Fair to say the Indian fans went a little wild when this man strolled out," cricket.com.au captioned Kohli's picture on Twitter.

Fair to say the Indian fans went a little wild when this man strolled out #AUSvIND pic.twitter.com/Uo4KoWFVx0

The Indian skipper went to the stands to meet some of his fans, got clicked and gave autographs before the start of the game.

"Captain Kohli with a heart-warming gesture before the start of game at The Gabba," the BCCI said in a tweet.

Captain Kohli with a heart-warming gesture before the start of game at The Gabba #TeamIndia #AUSvIND pic.twitter.com/KPANHQ78FT

India have a better record against the Aussies in the shortest format. They have won 10 matches and lost five in 15 meeting with the Australians in T20Is. On the last tour, India, under the captaincy of MS Dhoni, had registered a 3-0 whitewash against Australia. However, Dhoni is not a part of the T20I team that is competing in the ongoing series.

At the pre-match conference on Tuesday, Kohli assured a non-aggressive approach but added that his team would not back down if Australia cross the line.

"Aggression depends on how the situation is on field. If the opposition is aggressive towards you then you counter it. India is not a team that starts anything but we always draw a line of self-respect. If that line is crossed, we stand up to that," Kohli said.

"Aggression also means that within team how possessive you are to that situation and as a team how much effort you are putting in for each wicket. You can see that in body language, when bowlers bowl and how long they can keep hitting the same area. Batsmen can be aggressive without saying anything," he added.