The first T20I in Brisbane may provide Rohit Sharma a chance to create history. 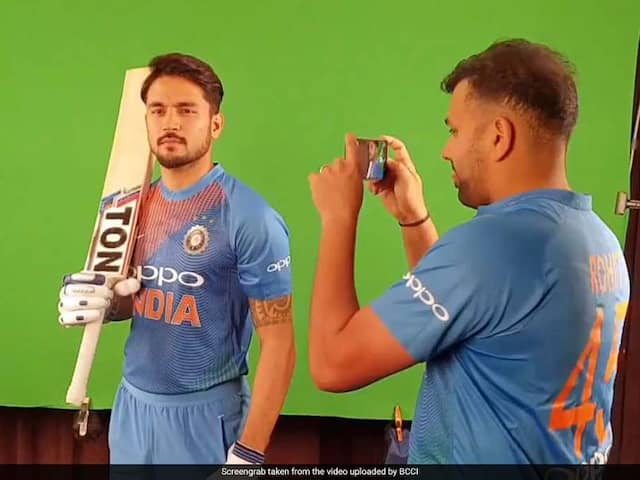 Rohit Sharma decided to test his 'camera skills', shooting middle-order batsman Manish Pandey in the Indian jersey, ahead of the first T20 International at the Gabba. Ahead of the big-ticket opening match, Rohit lightened the burden and went behind the lens to shoot Pandey, who will miss the Brisbane encounter. As captain Virat Kohli came back in the team, Pandey couldn't find his name in the 12-man squad for the 1st T20I, which the BCCI announced on Tuesday.

Directing Pandey to act for the video, Rohit said some encouraging words: "Pretend as if you're getting ready. It'll be just 10 seconds. You've to do something."

"I am going to do some direction. Let's see how it goes. A bit of a camera work rather, not direction actually," Rohit explained the viewers.

The Brisbane T20I, which will begin India's long tour of Australia on Wednesday, may provide Rohit a chance to create history. With 2207 runs to his name, Rohit is currently the second highest run-scorer in T20I cricket. He is just 64 runs short of leading batsman Martin Guptill. The New Zealand batsman has scored 2271 runs in T20I cricket so far.

Recently, Rohit led India to a 3-0 clean sweep against the West Indies in a T20I series at home. Captain Kohli, who is currently the fifth-highest T20I run-scorer with 2102 runs, was rested for the Windies series and Rohit took the charge of the men-in-blue.

Rohit created many records during India's home series win. He went past skipper Kohli to become India's leading run-scorer in the T20I cricket. He also became the only India captain to lead his team to a 3-0 clean sweep win twice. Earlier, the Mumbai-based cricketer had led the Indian team to a 3-0 whitewash against Zimbabwe in 2016.

The 31-year-old opening batsman is the only batsman in T20I history who has four hundreds to his name. While captain Kohli is yet to score his first one in the shortest format.

Before the start of the series, Rohit said India are keen to "leave a mark" in Australia.

"Last time we played a Test series here, although we lost two games and drew one, but I thought we played few close games, especially at Brisbane. We want to make it count this time around, there is a real good feeling inside the group. The motive is to seize all the moments and win," he said at the press conference.