Virat Kohli Should Continue to Bat at No. 3, Yuvraj Singh Must Wait: Sunil Gavaskar

Rohit Sharma and Virat Kohli struck fifties that helped India post a record 184 for three against Australia in the second Twenty20 at the Melbourne Cricket Ground (MCG). The spinners worked in tandem to restrict the hosts to 157 for eight, clinching their first-ever Twenty20 series win Down Under. 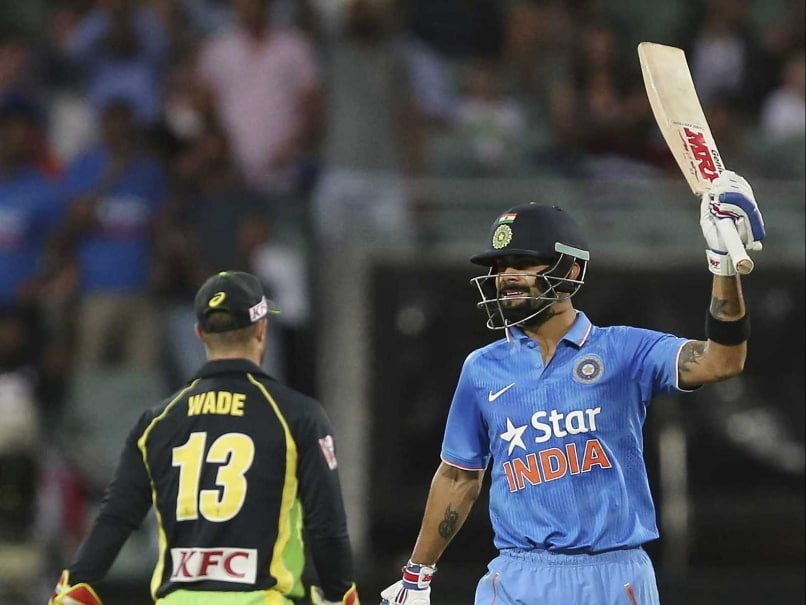 Virat Kohli backed his unbeaten 90 in the first T20 with an unbeaten 59 off 44 balls to help script India's historic win against Australia.© AP

India beat Australia by 27 runs to take an unbeatable 2-0 lead in the three-match Twenty20 series against Australia. Thanks to a magnificent all-round performance, led by fifties from from Virat Kohli and Rohit Sharma as well as fine bowling from the spinners, India romped home to victory. With the final T20 on Sunday at Sydney a mere formality, former captain Sunil Gavaskar has cautioned against experimenting with the batting order and playing around with a winning combination. (Scorecard)

A fine batting display saw India post a mammoth 184 for three against Australia, which was a record score at the venue. Ravindra Jadeja took two wickets while Ravichandran Ashwin and Yuvraj Singh took one each as Australia collapsed after a fine start from Aaron Finch and Shaun Marsh. (After Rohit, Kohli Fifties, India Spinners Seal T20 Series Win vs Australia)

Kohli backed his unbeaten 90 in the first T20 with an unbeaten 59 off 44 balls to help script the historic win. But with the top order firing on all cylinders, the middle-order has hardly had a look-in. (All-Round India Win Maiden T20 Series Versus Australia)

Yuvraj is yet to face a single ball and with the series in the bag, captain Mahendra Singh Dhoni might be tempted to give him some much-needed batting time.

However, Gavaskar feels the stylish southpaw will need to wait for his chance and there should be no experimenting with Kohli's position in the batting order.

"Virat should continue to bat at No.3. Yuvraj must wait for his opportunity. Winning 3-0 is important and India should stick to the winning formula," Gavaskar told NDTV.

"Kohli is setting the bar for the next superstar of Indian cricket. He has been in dream form. He can wake up at the middle of night and bat well."

"If I was a bowler, I wouldn't bowl to both Rohit and Virat. Rohit can tickle you to death. Virat can punch you to death," the former India opener said.

Gavaskar said that the "comprehensive win" against Australia would put India in good stead ahead of the ICC World Twenty20 at home in March. (No World Twenty20 Matches inDelhiWithout Clearances, Warns BCCI)

The way India have won the Twenty20 series against Australia is a good omen for the World Twenty20. It was a comprehensive win," he said.

The former India captain also praised the selectors for choosing a "well balanced side" and giving Dhoni the firepower to win matches.

"Yuvraj, Ashish Nehra and Hardik Pandya have given Dhoni bowling options. This has been a good selection. The team balance is very good."

Gavaskar was also critical of the Australians for taking the T20 format too lightly.

"Not playing David Warner and Steven Smith in the MCG match shows Australia's arrogance. They have been put in their place," said Gavaskar.

Comments
Topics mentioned in this article
India Cricket Team Australia Cricket Team Virat Kohli Rohit Sharma MS Dhoni Yuvraj Singh Ravindra Jadeja Sunil Manohar Gavaskar Australia vs India 2015-16 Cricket
Get the latest updates on SA vs IND 2021-22, check out the Schedule and Live Score . Like us on Facebook or follow us on Twitter for more sports updates. You can also download the NDTV Cricket app for Android or iOS.