Mahendra Singh Dhoni scored zero after India looked good to chase Australia's 348 for 8 in the fourth ODI in Canberra. The hosts lead the five-match series 4-0. 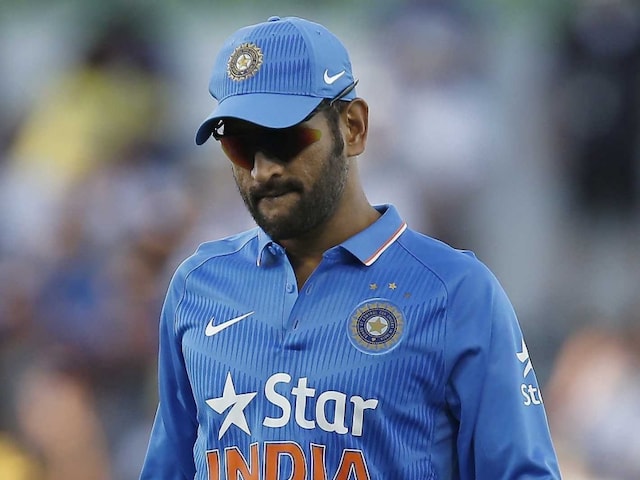 Mahendra Singh Dhoni, who batted at No. 4 since Ajinkya Rahane was injured, was out for zero.© AP

"I'm not angry, I'm disappointed. This was one game we should have batted much better. I'll take responsibility, I should have carried on but I got out," said Mahendra Singh Dhoni after India lost the fourth ODI in Canberra on Wednesday by 25 runs. (Scorecard | Match Report | Highlight)

India were cruising to victory following a 212-run second-wicket stand between Shikhar Dhawan (126) and Virat Kohli (106), but a flurry of wickets and an unnecessary haste to force the pace dented India's chances to score a win in a so far one-sided series. From November 2014, Australia have remained unbeaten in 19 ODIs at home. (Read More in Australia vs India 2016)

Dhoni, who batted at No. 4 since Ajinkya Rahane was injured, was out for zero. He edged John Hastings to the keeper failing to read a ball that left him. Dhoni's approach to the delivery looked flawed and Australia did not look back after that.

Rookies Gurkeerat Singh Mann and Rishi Dhawan looked inept at handling the pressure and threw their wickets away leaving Ravindra Jadeja with a tail that seldom wags.

"There was a bit of pressure on the youngsters. International cricket is all about pressure, you think about the right shot. You realise you have to take a bit more time and take the game slightly to the end," lamented Dhoni in a post-math chat. (Canberra ODI vs India: Australian Umpire Wears Helmet to Ward Off Boundary Storm)

Dhoni praised the efforts of his top three batsmen. Rohit Sharma (41 off 25 balls) gave India a flying start. Dhawan and Kohli then blasted the Australian attack to put India ahead of the Aussies at every stage of the game till they perished.

"Rohit batted very well with Shikhar. And Dhawan and Kohli batted majestically. In the last five years, we have not had a fixed bowling line up other than the spinners. That pushes us to the extreme to get some extra runs," said Dhoni. 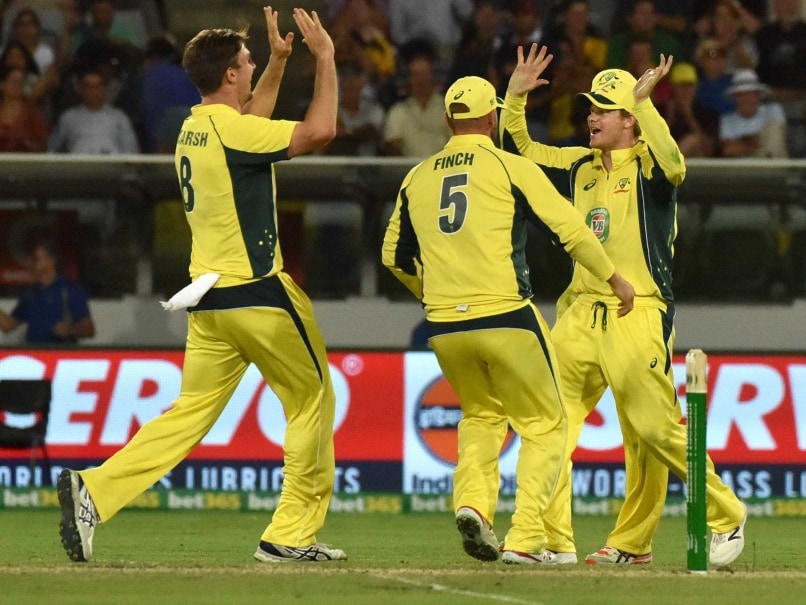 Australian players celebrate picking up a wicket during the fourth One-day International match against India at the Manuka Oval in Canberra.

On a roll, Australia skipper Steven Smith not only praised the effort of Dhawan and Kohli, but also gave full credit to Richardson and his team's never-say-die attitude.

"It looked like they were cruising, a couple of wickets swung things. Richardson did very well as well. You have to try everything when Kohli and Shikhar Dhawan were batting, it felt like we needed 15 or 16 fielders. We had a never say die attitude tonight. When we had a sniff, we made a run for it," Smith said.

Richardson registered his maiden five-wicket haul in ODIs to earn a well-deserved Man of the Match award and he was over the moon.

"It's a funny old game, cricket. We always knew it would speed up once we got a wicket but we did not get it. Hastings could be up here as well. You try and bowl good balls but sometimes they go for sixes. It's our job to try and stop them," said the 24-year-old medium-pacer.

Comments
Topics mentioned in this article
Australia vs India 2015-16 MS Dhoni Manuka Oval, Canberra Ajinkya Rahane Rohit Sharma Shikhar Dhawan Virat Kohli Cricket
Get the latest Cricket news, check out the India cricket schedule, Cricket live score . Like us on Facebook or follow us on Twitter for more sports updates. You can also download the NDTV Cricket app for Android or iOS.