Jamaican sprint star Usain Bolt overcame a "very bad" start to successfully kick off the defence of his world 100m title on Friday. 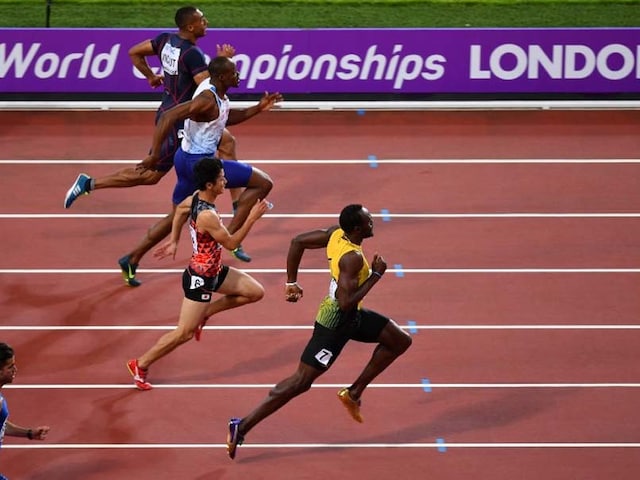 Usain Bolt will retire after the World Championships© AFP

Jamaican sprint star Usain Bolt overcame a "very bad" start to successfully kick off the defence of his world 100m title on Friday, but American arch-rival Justin Gatlin was jeered by the British public. Bolt, seeking a 12th world title in his swansong season, found himself fifth halfway into the blue riband event before putting on the afterburners to win his heat in 10.07 seconds.

"That was very bad," Bolt said. "I stumbled coming out of blocks, I'm not fond of these blocks.

"I think they're the worst ones I've ever experienced.

"I have to get this start together because I can't keep doing this. It's shaky. When I did my warm up it (the blocks) pushed back. It's not what I am used to."

Bolt v Gatlin at the 2012 Olympics at the same London stadium had been billed as 'good against evil', given the American's doping-tainted past, and so it again proved.

Gatlin, the last man to beat Bolt over 100m -- by a hundredth of a second in Rome in 2013 -- was met with loud booing and jeering when shown on the big screen before his heat and after he streaked through in a winning time of 10.05sec in his heat.

"It's not the panto season," the stadium announcer pleaded to the packed-out 60,000 seater London Stadium as a bemused-looking Gatlin made a sharp exit from the track.

"I'm not worried about the crowds. I just focus on my start and my race," said Gatlin.

"I am just here, seeing my teammates, seeing my countrymen and just having a good time."

Bolt had no complaints about his welcome, however, describing the crowd as "always wonderful".

"They always show me so much love and I always appreciate being here," he said.

"I'm excited about getting through to that final and doing my job to my best."

Bolt will be joined by Jamaican teammates Julian Forte, the sole sprinter to go under 10sec with 9.99, and Yohan Blake, who capitalised on Bolt's sole hiccup at global events since winning at the Beijing Olympics -- a false start -- to be crowned 2011 world champion in Daegu.

The 35-year-old Gatlin, who served a four-year ban reduced from eight for doping from 2006-10, will be joined in Saturday's semi-finals by compatriots Christian Coleman, who has this season's fastest time of 9.82sec, and Christopher Belcher.

But South African Thando Roto, with an impressive best of 9.95sec this season, was disqualified for a false start, fancied teammate Akani Simbine also having to sneak in as one of the fastest qualifiers.