Watch: Neeraj Chopra Misses 90m-mark By A Whisker, But Betters His Own National Record In Stockholm Diamond League Meet

Olympic gold medallist Neeraj Chopra produced yet another stellar display to finish second in a Diamond League meeting in Stockholm. 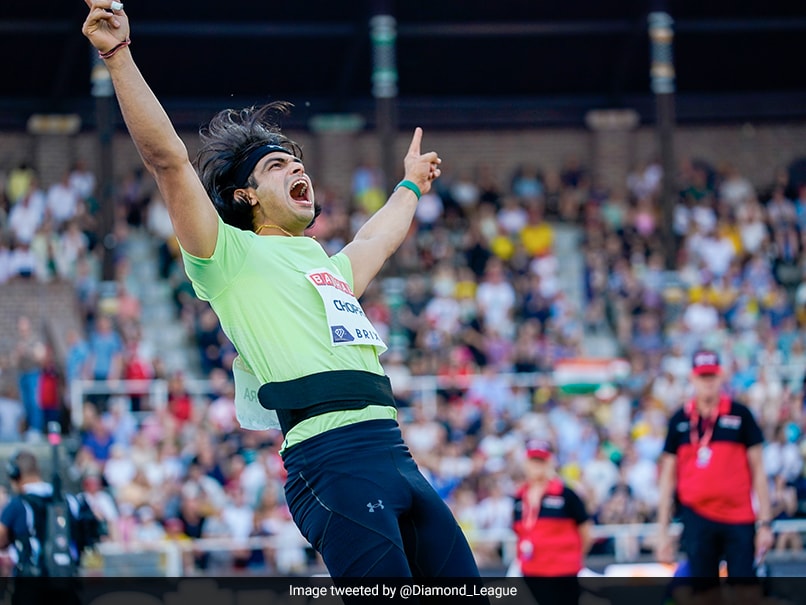 Neeraj Chopra bettered his own national record with a throw of 89.94m.© Twitter

Olympic gold medallist Neeraj Chopra produced yet another stellar display to finish second in the Diamond League meeting in Stockholm. This was Neeraj Chopra's first-ever top-three finish in a Diamond League meet. The Tokyo Olympics champion once again began on a bright note, throwing 89.94m in his very first attempt. The throw was agonisingly close to the 90m-mark, something no Indian javelin thrower has ever achieved. However, the Indian star still bettered his earlier national record of 89.30m, which he had achieved while finishing second in the Paavo Nurmi Games in Turku, Finland, on June 14.

BOOM! Ladies and gentlemen, your new National Record throw of 89.94 meters from our boy #NeerajChopra at the #StockholmDL.#CraftingVictories pic.twitter.com/OHovf5GoAD

World champion Anderson Peters of Grenada took top position with a best throw of 90.31m, which he achieved in this third attempt.

"Today, I feel good and after first throw, I thought I could throw even over 90m today. But it is OK as I have more competitions coming this year," Chopra said after the event.

"I am close to 90m now and I can throw it this year. Despite the fact that I did not win tonight, I feel very good because I did my best.

Julian Weber of Germany was third with a fifth round throw of 89.08m while Tokyo Olympic silver medallist Jakub Vadlejch (88.59m) of Czech Republic was fourth.

Another Czech athlete and Tokyo Olympics bronze medallist Vitezslav Vesely was seventh in the eight-man field with 82.57m.

Neeraj Chopra is only the second Indian to finish in the top-three of a Diamond League meet after discus thrower Vikas Gowda.

The 2014 Commonwealth Games gold medallist Gowda, who retired in 2017, had finished in top-three in a Diamond League event four times in his career. He had finished second in 2012 (New York) and 2014 (Doha) and third in Shanghai and Eugene in 2015.

Comments
Topics mentioned in this article
Neeraj Chopra Athletics
Get the latest updates on ICC T20 Worldcup 2022 and CWG 2022 check out the Schedule, Live Score and Medals Tally. Like us on Facebook or follow us on Twitter for more sports updates. You can also download the NDTV Cricket app for Android or iOS.